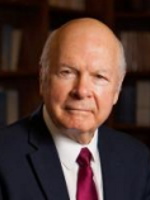 Since joining the Brigham Young University faculty in 1983, Robert L. Millet has served as dean of Religious Education, chair of the department of Ancient Scripture, director of the Religious Studies Center, and Richard L. Evans Professor of Religious Understanding. He is now professor emeritus of ancient scripture at BYU. He received his bachelor’s and master’s degrees in psychology from BYU and his PhD in religious studies from Florida State University. For decades Dr. Millet has been deeply involved in interfaith relations, including participation in formal academic dialogues with evangelical Christians, the Church of the Nazarene, and Community of Christ (formerly the Reorganized Church of Jesus Christ of Latter Day Saints). He is also a Distinguished Scholar with the John A. Widtsoe Foundation, with specific responsibilities for interfaith relations. He is the author or editor of more than seventy books and two hundred articles, book chapters, reviews, or encyclopedia entries, dealing mostly with the doctrine and history of The Church of Jesus Christ of Latter-day Saints and its relationship to other faiths. Born in Baton Rouge, Louisiana, he served in the Eastern States Mission from 1967 to 1969. He and Shauna Sizemore married in 1971 and had six children.