Joseph Smith, the Prophet and Seer 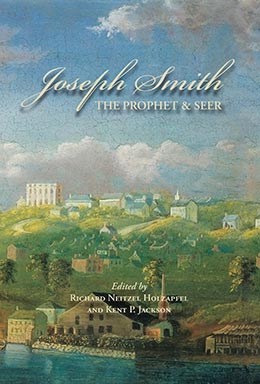 The future of scholarship concerning the Prophet and Seer Joseph Smith has never appeared brighter. Amid the publication of the Joseph Smith Papers, this book adds poignant context to his writings and revelations. Drawing from a lecture series held at Brigham Young University entitled “Joseph Smith’s Prophetic Ministry,” the leading scholars and educators on Joseph Smith shared their wealth of knowledge on his life and history. Dividing the years of his prolific life into chapters, the authors create a compelling chronological view of the Prophet’s ministry and teachings, as well as the historical perspective necessary to capture the depth of his influence. Emerging from this material is a clearer picture of Joseph’s remarkable, complex, and passionate personality, shedding light on his divine mission to restore the Lord’s kingdom on the earth.

Recent research has not diminished him in the least but shows him standing taller than ever as the prophet of the Restoration, the great seer who set in place the Lord’s kingdom for the latter days.
British author Charles Mackay published a small work in 1851, claiming that it was the first public history of “this new religion” founded in America by Joseph Smith, “one of the most remarkable persons who has appeared on the stage of the world in modern times.” Although Mackay was not the first to write a history of the Latter-day Saints, he was right in asserting that Joseph Smith was a most remarkable person. Like those New Testament Apostles who left their personal lives and ambitions to follow Jesus, Joseph Smith was a true disciple of Jesus Christ.
Since the beginning of the Restoration, many individuals have collected the Prophet’s teachings and attempted to tell his story. Yet the task of reconstructing the life of Joseph Smith is fraught with difficulties, as it is with telling the story of anyone who lived in the past.
This book includes presentations from the foremost educators and scholars on Joseph Smith and his life. These messages provide current and faithful perspectives and will give helpful context for the study of Joseph Smith’s teachings. Each presenter is either on the Religious Education faculty at BYU or is part of the team preparing the landmark Joseph Smith Papers series.
These scholars look at Joseph Smith with fresh eyes, mining both old evidence and new discoveries to show who the Prophet was, what he accomplished, and why his life matters. As a result of these efforts, in some ways we may know more about the Prophet than did those who lived during his lifetime, given the intimate look we have into his personal diaries and letters.
Two introductory chapters focus on his early life, 1805-19, and the early years of the Restoration, 1820-29. Each chapter thereafter focuses on a specific year of his ministry from 1830-1844, providing an overview of the major events in Church history and discussing a major doctrinal or historical topic related to that period. This exciting and thorough treatment will lift people’s understanding of the Prophet Joseph and the gospel to new heights.
Contributors in this book include Richard Neitzel Holzapfel, Richard E. Bennett, Kent P. Jackson, Robert J. Woodford, Grant Underwood, Alexander L. Baugh, J. Spencer Fluhman, Steven C. Harper, Ronald K. Esplin, William G. Hartley, Ronald O. Barney, Andrew H. Hedges, and Robert L. Millet.