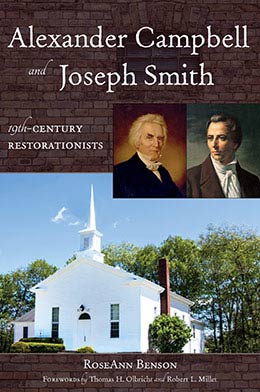 Two nineteenth-century men, Alexander Campbell and Joseph Smith, each launched restoration movements in the United States. They vied for seekers and dissatisfied mainstream Christians, which led to conflict in northeastern Ohio. Both were searching for the primordial beginning of Christianity: Campbell looking back to the Christian church described in the New Testament epistles, and Smith looking even further back to the time of Adam and Eve as the first Christians. Campbell took a rational approach to reading the Bible, emphasizing the New Testament, and began by advocating reform among the Baptists. Smith took a revelatory approach to reading the Bible, both Old and New Testaments, and adding new scriptures. This book is a comparison of these two nineteenth-century men and the resto­ration movements they created with an in-depth examination of what restoration meant to both groups, as well as their beliefs, their interactions with each other, their similarities, their differences, and their unique contributions to Christianity.

This book is copublished by BYU Press and Abilene Christian University Press.