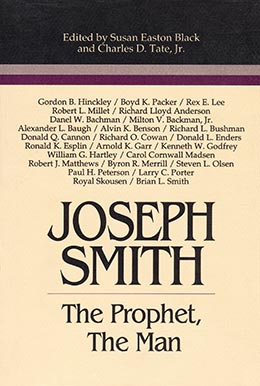 Joseph Smith: The Prophet, the Man

Robert L. Millet was dean of Religious Education and associate professor of ancient scripture at Brigham Young University when this was published.

This is a time of thanksgiving. It is an occasion for the expression of profound gratitude—

· for God, our Father, and his son, Jesus Christ, for their goodness and mercies to us;

· for the restoration of the gospel through the Prophet Joseph Smith—for the knowledge and truth, the keys and authorities delivered once again to earth through him;

· for President Brigham Young, who, through his prophetic gift, established what has come to be Brigham Young University;

· for those prophets and revelators who followed, mighty men of Zion whose single-minded vision has shaped the destiny of this institution;

· for the knowledge that the keys of the kingdom of God, as delivered to the choice seer, Joseph Smith, are held and exercised by the Lord’s anointed servants today;

· for the generosity of the board of trustees in making available the funds for this beautiful facility;

· for the skills and talents of those who designed and constructed the building; and finally,

· for the faithful tithe payers of the Church, high and low, the wealthy and the widows, the aged and the little children, those of simple faith throughout the earth whose free-will offerings have made the ground upon which we now walk holy ground.

Dedicatory services are good for the soul. They are a time of renewal and refreshment. President Joseph Fielding Smith reminded us at the dedication of the Provo Temple that such gatherings as these enable us not only to dedicate premises, but also people. Today begins a time of rededication for all of us, a time for focusing attention upon things dear to the heart, things closely associated with why we do what we do. This facility, the Joseph Smith Memorial Building, named after and dedicated to the honor of Joseph Smith, Jr., shall stand as a constant reminder of the light that has burst upon a modern world, that light we call the Restoration. Fifty years ago, at the time of the dedication of the old Joseph Smith Building, President David O. McKay observed:

It is fitting that there should be on this campus an edifice bearing the name of the Prophet Joseph Smith. It will ever connote the greatest event in history, excepting only the birth, life, death, and resurrection of our Lord and Savior Jesus Christ. Without revelation given to Joseph Smith there would be no Brigham Young University. In all classes here at this school there should be connoted that great truth: that God lives, that Jesus is the Christ, and that Joseph Smith was the divinely inspired Prophet of the Lord, chosen to establish Christ’s Church on earth in this latter day.

We face a particular challenge at Brigham Young University: that of preparing a generation of young people who are balanced in their approach to life—who are as qualified to defend and proclaim the restored gospel and epitomize the highest virtues of Christian conduct as they are to make a contribution in industry, in business, in art, in science, or in the classroom. We have not done our jobs well if the students here have not at least made progress toward the realization of the scriptural injunction to “seek learning, even by study and also by faith” (D&C 88:118). Serious gospel study must accompany serious study of the academic disciplines if students are to gain, as Peter expressed it, “a reason for the hope” that is within them (see 1 Peter 3:15). Just as knowledge by study is not to be had through a mere perusal of texts or an occasional conversation, so knowledge by faith comes at a price. In his last address to BYU students, President Harold B. Lee explained:

The acquiring of knowledge by faith is no easy road to learning. It will demand strenuous effort and continual striving by faith, In short, learning by faith is no task for a lazy man. Someone has said, in effect, that “such a process requires the bending of the whole soul, the calling upon from the depths of the human mind and linking the person with God. The right connection must be formed; then only comes the knowledge by faith, a kind of knowledge that goes beyond secular learning, that reaches into the realms of the unknown and makes those who follow that course great in the sight of the Lord.” (Lee 91).

Indeed, the encouragement and motivation given to students to be as dedicated to the enterprise of revelation as they are to the acquisition and dissemination of secular knowledge will reap dividends in time and in eternity. There are discoveries to be made, truths to be examined and correlated, minds to be expanded. And, in addition, there are souls to be stirred, hearts to be reborn, leadership for the kingdom to be developed, and vision to be acquired.

All of the religion classes on this campus (over 450 classes in the fall) are not taught in the Joseph Smith Building. Such is neither possible nor desirable. All of the religion classes are not taught by full-time religious educators. Such is neither possible nor desirable. The power and strength of Brigham Young University is to be found in the fact that religion permeates the entire campus—it is taught by sociologists and biologists and art historians and organizational behaviorists in the Kimball Tower, the Tanner Building, the Clark Law Building, and the Harris Fine Arts Center. Religious education is the responsibility of the entire university community. Though administrative matters may center in this facility, the light of the gospel should and must be felt by students across the length and breadth of this place we call a temple of learning.

There is an incident in the Book of Mormon that illustrates how places become hallowed. After Alma the Elder had repented and escaped the reach of King Noah, he began to teach the gospel, baptize, congregate the people near the waters of Mormon, and establish the order of the Church. “And now it came to pass,” Mormon writes,

We hallow a place by attending to sweet and sacred matters there. A site becomes hallowed when in that location a new light shines in the soul, when new vision and new perspective on life come to pass. So it was in the old Joseph Smith Building. The spark of testimony was planted, the flames of faith fanned. Thousands of students came to know, not only of the truthfulness of the gospel, but also of the truths of that gospel. They came to love the Lord and charted a course to come to know him. Their righteousness has been felt and continues to be a leavening influence throughout the world. In my own case, it was in the old Joseph Smith Building that I came to love and honor the Prophet Joseph Smith, to treasure his revelations and translations, to feel an overwhelming desire to be loyal to him and to the cause he set in motion.

And so it will be in this new edifice. Building on the foundation laid by men and women of intellect who were grounded and settled in the faith of their fathers and mothers, we shall carry on. We shall teach and we shall testify. Those who instruct shall seek to inspire with at least the same intensity and enthusiasm that they seek to inform, to bring about that delicate and difficult balance between an informed and enlightened exchange and a genuine spiritual experience. That which is to be taught in this building must be and shall be worthy of the blood of the Prophet Joseph and the Patriarch Hyrum, worthy of the toil and consecration of over a century and a half of devoted members of the Church. Nothing less than the teaching and writing of faithful history and sound doctrine will do. Joseph Smith described the solemn responsibility of leading others to Christ. From Liberty Jail he wrote:

The things of God are of deep import; and time, and experience, and careful and ponderous and solemn thoughts can only find them out. They mind, O man! if thou wilt lead a soul unto salvation, must stretch as high as the utmost heavens, and search into and contemplate the darkest abyss, and the broad expanse of eternity—thou must commune with God. How much more dignified and noble are the thoughts of God, than the fain imaginations of the human heart! None but fools will trifle with the souls of men. (Teachings of the Prophet Joseph Smith 137)

The work to be done here is a bit frightening. We are dealing with human souls, with sons and daughters of God the Eternal Father. They are also the sons and daughters of good men and women throughout the world, faithful Latter-day Saints to plead with God in prayer that someone, somewhere, will touch the heart of their precious child. I feel confident that my colleagues in Religious Education join with me in rededicating ourselves to the promulgation of those foundational truths that constitute the core principles and doctrines of the restored religion of Jesus Christ. I invite the faculty throughout the campus to share in this supernal and soul-satisfying enterprise—”all that the youth of Zion may be taught, built up, encouraged, heartened, that they may not fall by the wayside, but go on to eternal life” (Clark 256). We need not and shall not undertake the task alone, for the scriptural promise of divine assistance is sure. AS we teach one another the doctrine of the kingdom, his grace—the Lord’s grace, his Spirit, his enabling power—will attend us. May we so qualify is my prayer, in the name of Jesus Christ. Amen.