Living the Book of Mormon: Abiding by Its Precepts 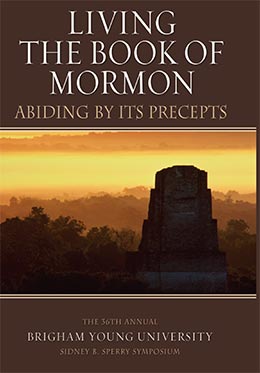 In this volume are papers presented at the Sidney B. Sperry Symposium held on the Provo campus of Brigham Young University on October 26–27, 2007. This year the symposium takes its theme from Joseph Smith’s statement, “I told the brethren that the Book of Mormon was the most correct of any book on earth, and the keystone of our religion, and a man would get nearer to God by abiding by its precepts, than by any other book” (introduction to the Book of Mormon).

Topics of the 2007 Sidney B. Sperry Symposium include redemption through Christ, the “three Rs” of the Book of Mormon, and the divine precept of charity. Presenters include Elder Joe J. Christensen, Terry B. Ball, Richard O. Cowan, and Robert L. Millet.

This symposium is distinctive in that it centers on the practical application of the precepts taught in the Book of Mormon—precepts that can help us draw nearer to God.—Elder Joe J. Christensen, emeritus member, First Quorum of the Seventy.