The Book of Mormon: Helaman Through 3 Nephi 8, According to Thy Word 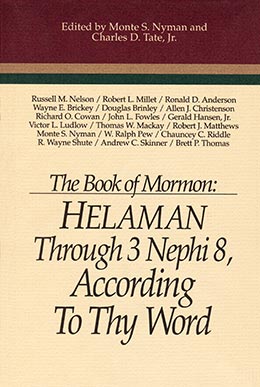 The Seventh Annual Book of Mormon Symposium at BYU

“All things shall be done unto thee according to thy word, for thou shalt not ask that which is contrary to my will.” This was the Lord’s glorious promise to Nephi, son of Helaman. The general wickedness that prevailed in much of Nephite society during Nephi’s day was in stark contrast to his exemplary faithfulness. Why was this so? How did the people’s decline come about so rapidly? What specific messages do the book of Helaman and the early chapters of 3 Nephi contain for our day? Seventeen symposium papers collected in this volume address these and other issues related to events and conditions among the Nephites and the Lamanites during the eighty or so years prior to the Savior’s appearance on the American continent. Contributors not only discuss great doctrinal teachings of stalwarts like Nephi, Samuel the Lamanite, and Mormon but also provide detailed analyses of how and why the Nephites moved from a condition of righteousness to one of wickedness during this critical period in their history.