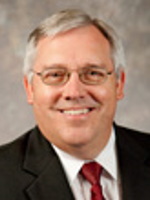 Brian Michael Hauglid was an associate professor of ancient scripture when this was written. He joined the ancient scripture faculty in 1999. Brian completed his PhD at the University of Utah in Arabic and Islamic studies in 1998. He has been a Nibley Fellow and he received the BYU Young Scholar award in 2006. From 2013-2017 Brian served as the director of the Laura F. Willis Center at the Neal A. Maxwell Institute for Religious Scholarship and the editor of the Journal of Book of Mormon Studies. He also founded and edited the Maxwell Institute’s Studies in the Bible and Antiquity for 4 years. Brian has published on the Book of Abraham, most notably his A Textual History of the Book of Abraham: Manuscripts and Editions (2010), and is currently preparing to publish (with Robin Jensen) all of the Abraham and Egyptian documents to appear as volume 4 in the Revelations and Translations series as part of the Joseph Smith’s Papers Project (2018). Additionally, Brian is co-authoring an Oxford volume on the Pearl of Great Price with Terryl Givens (2018). Brian was an Oxford Fellow in the summer of 2014 and is currently a visiting Scholar in the Neal A. Maxwell Institute for Religious Scholarship. His research interests include the Book of Mormon, the Book of Abraham, the New Testament, Islamic studies, interfaith dialogue, temple studies, documentary editing, Christian history and theology, and LDS Church history. Brian enjoys playing guitar, hiking, family beach vacations, and sci-fi movies. He is married to the former Tessa McNamara and has three daughters.