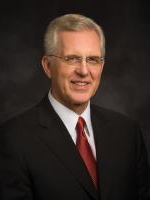 Elder Christofferson is a member of the Quorum of the Twelve Apostles. While serving in the Presidency of the Seventy, he had supervisory responsibility for the North America West, Northwest, and Southeast Areas of the Church. He also served as Executive Director of the Family and Church History Department. Earlier, he was president of the Mexico South Area of the Church, resident in Mexico City. Prior to his call to serve as a full-time General Authority of the Church, Elder Christofferson was associate general counsel of NationsBank Corporation (now Bank of America) in Charlotte, North Carolina. Previously, he was senior vice president and general counsel for Commerce Union Bank of Tennessee in Nashville where he was also active in community affairs and interfaith organizations.