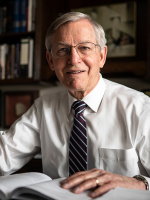 John W. Welch was the Robert K. Thomas Professor of Law at the J. Reuben Clark Law School when this was written. He is the founder of FARMS, editor-in-chief of BYU Studies, and a section officer in the Society of Biblical Literature. He teaches classes on biblical law and Jewish, Greek, and Roman laws in the New Testament. He was educated at Brigham Young, Oxford, and Duke Universities. He has made a number of significant discoveries in scripture research, including chiasmus in the Book of Mormon and seeing the parable of the Good Samaritan as an allegory of the full plan of salvation. He is married to Jeannie Sutton, and they have four children and fourteen grandchildren.