Let Us Reason Together

Essays in Honor of the Life's Work of Robert L. Millet 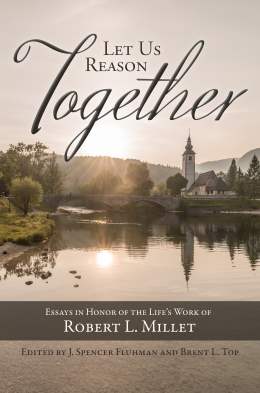 A single volume cannot accurately measure the influence of a beloved colleague, but this one nevertheless stands as modest evidence of Robert L. Millet’s prodigious impact over a career that spanned nearly four decades. His retirement provided an opportunity to gather some of us who count him as a mentor, colleague, and friend. We offer this collection of essays as a monument to his remarkable career as an administrator, teacher, and writer. That these pieces range across topics, disciplines, and even religious traditions seems especially appropriate given Millet’s own broad reach.

His students number in the thousands, his readers number perhaps ten times that number, and his friends in academia, the Church Educational System (CES) of The Church of Jesus Christ of Latter-day Saints, and around the globe in many faiths would be difficult to number indeed. Both in terms of his staggering literary production and in his broad collection of colleagues, it is not an overstatement to place Bob Millet among the most influential Latter-day Saint voices of the past quarter century.

We who count ourselves grateful recipients of his generous influence hope this volume’s collective thinking, faith, and lively conversation form a worthy “thank you” to our cherished colleague and friend.