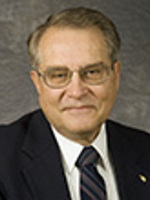 Victor Leifson Ludlow was a religion professor at Brigham Young University when this was written and is the author of several books on the book of Isaiah, most notably, Isaiah: Prophet Seer and Poet. Brother Ludlow did his undergraduate studies at BYU. He also served as a missionary for The Church of Jesus Christ of Latter-day Saints in the Central German Mission (later the Germany Dusseldorf Mission) from 1962 to 1964. Brother Ludlow then received a Danforth Scholarship and studied at Harvard University and Brandeis University, where he received his PhD in Near Eastern and Judaic studies. Brother Ludlow was awarded the distinction of BYU Honors Professor of the Year Award in 2002. He is also the translator of the selections from the Book of Mormon into Hebrew. Brother Ludlow is a scholar on Isaiah. Besides his book Isaiah: Prophet, Seer, and Poet, he also wrote Unlocking Isaiah in the Book of Mormon, Unlocking the Old Testament, and Principals and Practices of the Restored Gospel. While a BYU professor, Ludlow was also the main organizing force behind the annual Passover Seder held at BYU.