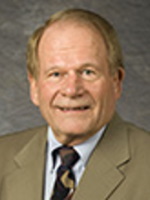 Douglas Brinley was a professor emeritus of Church history and doctrine at Brigham Young University when this was written. He graduated from Utah State University in economics and received a doctorate in family studies. He came to BYU in 1990 after twenty-four years as a seminary and institute teacher. He served as an institute director in California and Hawaii and as a mission president in Dallas, Texas, from 1987 to 1990. Brinley has written books and recorded audiotapes on marriage and family. He and his wife, Geri Brinley, have six children.