Joseph Smith and the Doctrinal Restoration 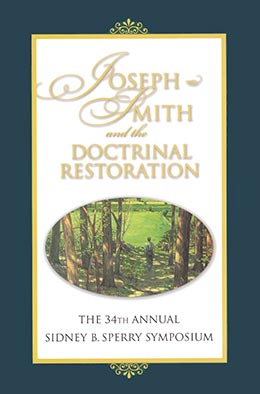 The 34th annual Sidney B. Sperry Symposium held at Brigham Young University marks several significant anniversaries. One hundred eighty-five years before, in the spring of 1820, the Prophet Joseph Smith experienced the First Vision when our Heavenly Father and His Son, Jesus Christ appeared to him in Palmyra, New York, ushering in the dispensation of the fulness of all times. The year also represented the 200th anniversary of the birth of the Prophet Joseph Smith, born December 23, 1805; the 175th anniversary of the founding of the Church, in April 1830; and the 170th anniversary of the calling of the Quorum of the Twelve Apostles, ordained in February 1835.

The focus of this symposium was to help those in attendance discover that the Restoration is real. And 175 years later it continues to move forward at a quickened pace to fulfill its ultimate and prophesied purpose.