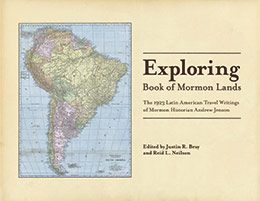 Described as “the most traveled man in the Church,” Andrew Jenson had been a lifelong globetrotter since his emigration from Denmark to Utah as a young boy in 1866. Although Jenson’s lifelong interest in the whereabouts of ancient Nephite and Lamanite ruins propelled him to visit the remote areas of Latin America, he returned with a powerful impression that the Latter-day gospel should be spread south, beyond the borders of Mexico. Jenson’s letters help readers better understand some of the events and experiences that seemingly led to the twentieth-century reopening of the South American Mission in 1925 by Church leaders. This book covers this important chapter from Jenson’s life and church history, which has rarely been told in over seven decades and is heretofore virtually unknown by most Mormon historians.