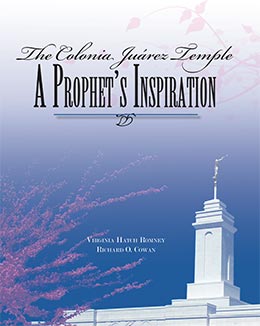 This is the fascinating story of the Colonia Juárez Chihuahua Mexico Temple, including the inspiration President Gordon B. Hinckley received while visiting Colonia Juárez, to build smaller-sized temples throughout the world. President Hinckley later recalled in the temple dedicatory prayer how the “revelation came of a desire and a prayer to help Thy people of these colonies who have been true and loyal during the century and more that they have lived here. They are deserving of this sacred edifice in which to labor for themselves and their forebears.”

This beautifully illustrated book (8 ¼ x 10 ½ inches) highlights the process, the progress, and the sacrifice of the wonderful Saints of the colonies who helped build this beautiful temple.