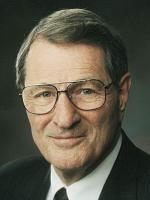 Neal A. Maxwell (July 6, 1926 – July 21, 2004) was an apostle and a member of the Quorum of the Twelve Apostles of The Church of Jesus Christ of Latter-day Saints 1981 until his death. Maxwell earned bachelor's and master's degrees in political science from the University of Utah. From 1952 to 1956, he worked in Washington DC, first for the US government and then as an assistant to Senator Wallace F. Bennett. Maxwell was a professor of political science at the University of Utah. He also held many administrative roles at the university. In 1967, Maxwell was called to be one of the first sixty-nine regional representatives, when that position was created. From 1970 to 1974, he served as the tenth Commissioner of Church Education overseeing the Church Educational System. It was under his direction that the system came to be known as the Church Educational System. Maxwell began serving as an LDS general authority in 1974, when he was called as an assistant to the Quorum of the Twelve Apostles. In 1976, Maxwell became one of the seven presidents of the seventy, when the calling of assistant to the Twelve was eliminated. Maxwell's business career included serving as a director of several business firms, including Questar Corporation, Questar Pipeline, and Deseret News Publishing Company. He was also active in public service, including service as chairman of the Utah Constitutional Revision Commission. Maxwell received the Liberty Bell award from the Utah State Bar in 1967 for public service. In 1973, the Institute of Government Service at Brigham Young University named him Public Administrator of the Year.