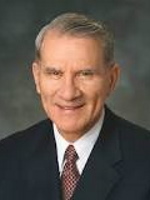 Brother Jensen graduated from BYU with a bachelor's degree in Spanish and history, a master's degree in LDS Church history and doctrine, and a doctoral degree in education. Brother Jensen spent his professional career as a full-time employee of the LDS Church. He was the director of scripture coordination for the church's Curriculum Department at the time of his call as a general authority. He previously worked for the Church Educational System as a seminary teacher and director of curriculum. Brother Jensen was also the director of training for the church's Missionary Department for a period of time.

Brother Jensen has served in the LDS Church as a bishop, branch president, counselor in the Missionary Training Center presidency, and was president of the church's Colombia Mission from 1975 to 1978. He was called to the Second Quorum of the Seventy in 1992 and transferred to the First Quorum of the Seventy in 1995. As a general authority, he has served in a number of area presidencies in Central and South America, as well as geographical areas covering parts of the United States and Canada. In 2004, Brother Jensen and Lynn A. Mickelsen, also of the Seventy, were appointed to supervise the formation and publication of a Spanish-language LDS edition of the Bible. Brother Jensen became a member of the Presidency of the Seventy on August 1, 2008. He was released from the Presidency on August 1, 2012, and designated as an emeritus general authority during general conference in October 2012.

On November 1, 1963, he married Lona Lee Child in the Manti Temple, and they are the parents of six children.