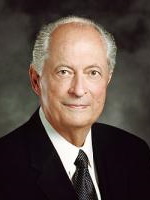 Elder Robert D. Hales was sustained as a member of the Quorum of the Twelve Apostles of The Church of Jesus Christ of Latter-day Saints on April 2, 1994.

He was a regional representative for five years prior to his call as a General Authority. He earlier served as a branch president, bishop, high councilor, and stake president’s counselor. He was president of the England London Mission in the late 1970s and has served as first counselor in the Sunday School general presidency.

Prior to his call to full-time Church service, Elder Hales had a distinguished business career, serving in executive positions with three major national companies.

Elder Hales was born in New York City on August 24, 1932. He is a graduate of the University of Utah and holds a master of business administration degree from Harvard. He served in the US Air Force as a jet fighter pilot.

He married Mary Crandall, and they have two sons.