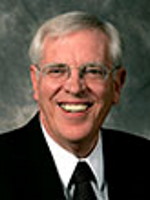 Richard D. Draper is a professor emeritus at Brigham Young University who taught Old Testament, New Testament, Pearl of Great Price, Book of Mormon, and the Book of Revelation. Brother Draper grew up in the Utah Valley and graduated from Pleasant Grove High School. Right after graduation he joined the armed forces for a year. Upon his return he served a mission to the Central Atlantic States. He attended BYU, and as soon as he graduated he was hired by the Church Education System, serving as an institute instructor for the next twenty years. When he completed his PhD in ancient history from BYU, he was hired by the Religious Education Department. He was a professor of ancient scripture specializing in prophecy, apocalyptic, and New Testament background when this was written. Brother Draper can read Greek, Hebrew, French, and German.