The Diaries of Charles Ora Card 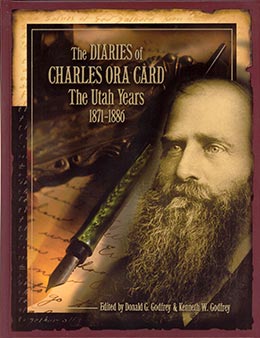 Winner of the Steven F. Christensen Best Documentary Award (Mormon History Association), The Diaries of Charles Ora Card are rich historical resources chronicling an important period of Mormon history that historian Thomas G. Alexander called "Mormonism in Transition." The diaries detail the pioneers' attempts to make the desert blossom as a rose, including their work on the Logan Temple and Tabernacle. During this era, the Church faced increasing economical and federal legislative pressures. The records accent the everyday struggles of a people; their leadership, both local and Churchwide; and Card's own capture by the US marshals.

"Charles Ora Card is usually remembered for his pioneering leadership of the Mormon settlements in Alberta, Canada, after 1885. But his experience and preparation were anchored in his earlier life in Cache Valley, Utah. Here he served in a number of important civic, educational, and ecclesiastical callings. He superintended the construction of the Logan Tabernacle (1883–77) and the Logan Temple (1877–84) and served as a counselor in the Cache Valley Stake presidency and then as stake president. In these professionally edited twenty-three journals are the records of both the rich history of a Mormon community and also the life experiences of a major contributor to that community."—David J. Whittaker, curator of Western and Mormon Manuscripts, L. Tom Perry Special Collections, Harold B. Lee Library, and associate professor of history at Brigham Young University.