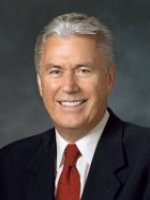 Elder Uchtdorf was born on 6 November 1940 in Ostrava, Czechoslovakia, to Karl Albert and Hildegard Opelt Uchtdorf. In 1947, his family became members of the Church in Zwickau, Germany. They fled to Frankfurt/Main in 1952, where he received an education in engineering. In 1959, he joined the German Air Force and served for six years as a fighter pilot. President Uchtdorf was sustained as a member of the Quorum of the Twelve Apostles of the Church on 2 October 2004 and was called as second counselor in the First Presidency of The Church of Jesus Christ of Latter-day Saints on 3 February 2008. He has served as a General Authority since April 1994. Dieter Uchtdorf and Harriet Reich married in 1962. They have two children and six grandchildren. With his call as an Apostle, the Uchtdorfs left their homeland and now live permanently in the United States.