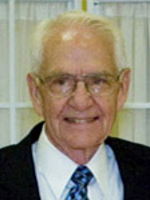 Monte S. Nyman (1929-2011) was president of Southern Virginia University (SVU) from 2003 to 2004. From 1999 to 2000 he was the baseball coach at SVU, then was appointed academic vice president, and then president until retiring in 2004. Previously he worked as a professor of religion at Brigham Young University until retiring in 1996. While at BYU, Nyman served as director of Book of Mormon studies for the Religious Studies Center and for a time as acting head of the Ancient Scripture Department.

As a young man, Nyman served a mission in the North Central States Mission. Nyman received his bachelor's and master's degrees from Utah State University, both in physical education. He later received a doctorate from BYU in educational administration. Prior to joining the BYU faculty, he was the Institute of Religion director in Edmonton, Canada.

Nyman served in many positions in the LDS Church, including as a bishop and a member of the Correlation and Translation Committee. He wrote several books including Great Are the Words of Isaiah, An Ensign to All People, and The Most Correct Book: The Book of Mormon.