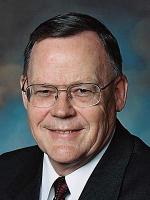 Gerald N. Lund was a General Authority of The Church of Jesus Christ of Latter-day Saints from 2002 to 2008. Lund is also a popular LDS fiction writer, having written The Work and the Glory series as well as the Kingdom and the Crown series, among other books. He has also written several theological non-fiction works for Latter-day Saints, including Hearing the Voice of the Lord: Principles and Patterns of Personal Revelation (2008) and The Coming of the Lord (reprint 2005). Before becoming a General Authority, he worked in the LDS Church Educational System.