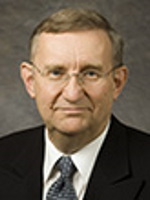 John P. Livingstone was an associate professor of Church history and doctrine at Brigham Young University when this was written. Born and raised in Edmonton, Alberta, Canada, he came to teach religion at BYU in 1998 following his service as president of the Michigan Detroit Mission. He taught seminary and institute in Canada for many years and is also a licensed psychologist in Alberta. From 2005 to 2007, he was president of the Association of Mormon Counselors and Psychotherapists (AMCAP). He and his wife, Linda, are the parents of six daughters and one son and have an ever-growing number of grandchildren.