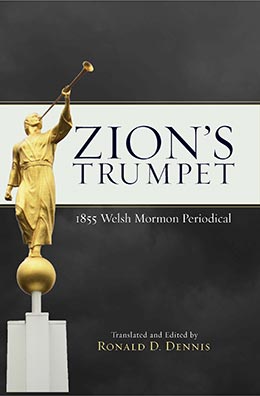 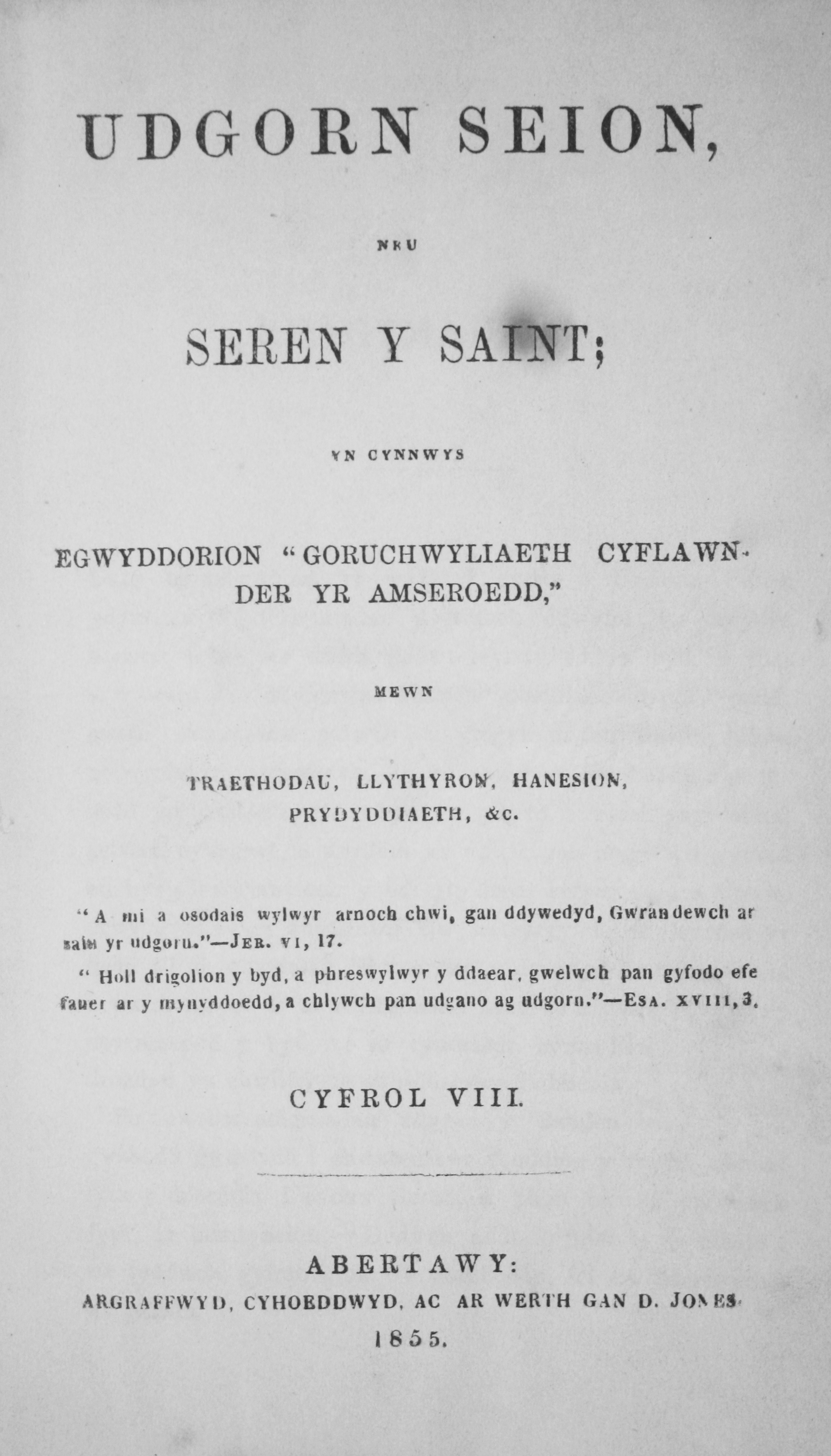 The vast majority of converts to Mormonism in mid-nineteenth-century Wales profited little from the Liverpool-based Millennial Star since their reading skills were limited to their native Welsh language. Consequently, in order to propagate the cause of his new religion and to establish a greater sense of community among members of the fledging Church in his homeland, Elder Dan Jones initiated the periodical Prophwyd y Jubili (Prophet of the Jubilee), the first non-English publication to speak for the Church of Jesus Christ of Latter-day Saints. In July 1846 on his brother’s press in the village of Rhydybont near the town of Llanybydder in Carmarthenshire Jones printed the first issue of this Welsh-language periodical that would have a run of thirty monthly issues. Heavily involved in the typesetting and proofing of this publication was the young John S. Davis, a recent convert from Carmarthen.

The target audience of Prophet of the Jubilee was all the inhabitants of Wales; in July 1846, however, fewer than 800 of these called themselves Latter-day Saints. This number swelled to nearly 4,000 during the following two-and-a-half years and in January 1849 the periodical’s name was changed to Udgorn Seion (Zion’s Trumpet) and Dan Jones’s protégé John S. Davis became its new editor. During 1853, the final year of Davis’s five-year editorship, his former mentor was back in Wales on a second mission. Jones contributed numerous articles to the periodical and became its editor upon Davis’s departure to America in 1854.

Jones published Zion’s Trumpet every week for the first eight months of 1854. In early September he moved the press to Swansea and made the periodical a biweekly. Of the 416 pages of the 1855 volume 201 pages, or 48% of the total, are from the pen of Dan Jones. Of the remaining 215 pages, 144 of them are Welsh translations of articles from other printed sources (the Millennial Star, the Deseret News, etc.), and 71 pages consisted of letters, poems, and articles from readers and subscribers of Zion’s Trumpet. The following table shows these aspects of the 1855 Zion’s Trumpet as compared with the 1854 volume:

In his editorial for the first issue of Zion’s Trumpet in 1855 Dan Jones declares that he was beginning the year “with greater desire and confidence” than ever before. And Jones had no greater desire than for the conversion and emigration of large numbers of his compatriots. His ardent appeal in this first issue for “zealous and experienced officers” to prepare themselves to serve missions in parts of North Wales where few or no Church members lived was repeated in many other issues. And even more frequent were his exhortations for all faithful Church members to prepare themselves to emigrate. Jones printed several letters from Welsh converts who had prospered greatly since going to America to offer encouragement to those still in Wales. And his regular updates about the ongoing Crimean War provided additional incentive for the Welsh to reposition themselves far away from its possible consequences.

In March of 1855 the well known anti-Mormon lecturer Andrew Balfour Hepburn, a former member of the Church from Scotland, and his biographer the Reverend Charles Short were in Swansea. In addition to giving lectures Hepburn also challenged Dan Jones to a public debate. Jones’s refusal to “wrangle with the corrupt man” is puzzling since during his first mission he was often the one to invite others to debate the teachings of Mormonism. However, in the April 14 issue of Zion’s Trumpet he explains that the main reason for his refusal was that he was following “the counsel of our head President in the matter.”

Apparently the counsel given by President Franklin D. Richards against debating applied specifically to debates with Hepburn, for Jones had a different reaction to some delegates sent to him on 3 April 1855 by the Reverend Charles Short with a challenge to a public debate. Jones rejected the wording of the topics initially presented to him but promised to meet with the Reverend Short in three weeks’ time upon his return from a pre-planned journey to Liverpool and discuss the ground rules for a debate. The meeting was held, but the Reverend refused to debate the topics that Jones suggested and went away in a huff. In lieu of the debate Jones posted notice that he would present a series of seven lectures about the topics summarily rejected by the Reverend Charles Short. (For further information about Hepburn and Short see Mormonism Exploded; or, the Religion of the Latter-day Saints proved to be a system of Imposture, Blasphemy, and Immorality by Hepburn and edited by Short, London: Simpkin, Marshall, & Co., Stationers’ Hall Court. Swansea: E. Pearse, 15, Wind Street, 1855.)

Outstanding book debts constituted a topic for regular mention in the various issues of this volume of Zion’s Trumpet. As Jones assumed the editorship of the periodical in January 1854 he also inherited from his predecessor unpaid debts for various Church publications amounting to more than £332. Despite all the reminders and exhortations given to Church leaders and book distributors during the year of 1854 the outstanding debt at the beginning of 1855 had risen to £492.

Part of the cause of this staggering increase stemmed from the misuse of Church funds by the president of the third largest conference in Wales. Dewi Elfed Jones, the ordained Baptist minister who had converted to Mormonism in April 1851, had been called to preside over the West Glamorganshire Conference in July 1854. One year later he was excommunicated for “moving pounds into his pocket” that rightfully belonged to the Church. (See Zion’s Trumpet 8 [21 July 1855]:235-38.) The loss of money was painful to Dan Jones as also were the “malicious assertions” made about him by one in whom he had placed great trust and confidence. (See Zion’s Trumpet 9 [10 May 1856]:156-57 for Dewi Elfed Jones’s 3 May 1856 letter of reconciliation and for information about his acceptance back into the Church. See also http://welshmormon.byu.edu/Immigrant_View.aspx?id=4161 for more complete information about this fiery and fascinating convert to Mormonism in Wales.)

While Dan Jones was still working on getting things back in order following the Dewi Elfed Jones disaster the editor of Yr Amserau (The Times), a newspaper published in North Wales, printed the Welsh translation of several excerpts of the anti-Mormon novel Female Life Among the Mormons. Jones reacted to this “nest of maggots” with a seventeen-page refutation spread over the 27 October and the 10 November issues of this year’s Zion’s Trumpet. In his characteristic metaphorical language he gives it the title “The Times with Its Carcass in Its Mouth!” – the carcass represents the dead body of all the disproven lies and tales about Mormonism that the editor of the Times has taken hold of with his teeth, “sucking the sap, maggots and all down to his greedy gut almost to the point of bursting his stomach.” Jones chides Mr. Lloyd, the editor of the Times, for giving credence to all the “filth” previously published about the Mormons and then proceeds to point out numerous flaws and inconsistencies in the excerpts from the novel. To counter the pollution caused to the “healthful air that blew along the hills of Wales” Jones declares his intent to “raise up a little breeze from the hills of truth to blow its stench back toward the rookeries of the birds of prey.”

Among all the expressions of frustration and disappointment throughout the 1855 volume of Zion’s Trumpet there are many segments in which Dan Jones’s unflagging optimistic spirit appears. This is especially true in the four-page article he published in the 29 September issue (p. 312-16) in which he gives the details of his recent visit to North Wales in company with Franklin D. Richards and other missionary colleagues. Because his personal journals apparently have not survived, Jones’s account of some boyhood memories have particular significance in providing a glimpse into a segment of his life not recorded elsewhere. Speaking of himself he wrote: “Angels of heaven around him would come; he perceived the light of the gospel, throng-like he would gather the children of the town to the surrounding fields to instruct them in faith, repentance, ‘baptism for forgiveness,’ and the ‘gifts of the Holy Ghost’ as promised; he would be persecuted by all for this, and so he wandered across the seas, islands and continents of the world seeking brethren of the same belief, whom for his comfort, an angel had promised him.” Jones’s search for truth finally bore fruit in 1843 when at age thirty-two he conversed extensively with a member of the Church of Jesus Christ of Latter-day Saints and realized he had found exactly what he had been looking for. The conversation took place during the time Dan Jones was captain of the Maid of Iowa, a small steamboat on the Mississippi. He was baptized 19 January 1843 in the Mississippi River. Three months later he went to Nauvoo and made personal acquaintance with the Prophet Joseph Smith with whom he formed a friendship that would take him to Carthage where he became the recipient of Joseph’s final prophecy in mortality – that he would survive the events of the next few days and return to Wales to fulfill the mission to which he had been previously called. Half of the remaining eighteen years Dan Jones had on this earth would be spent as a missionary to his compatriots in Wales.

In the foreword to this eighth volume of Zion’s Trumpet, Jones pleads for the assistance of his “fellow soldiers” at the “beginning” of the next volume, “regardless of who the trumpeter may be at its conclusion.” The following year Jones served as editor of Zion’s Trumpet for just the first seven issues, at which time his assignment would be to lead over five hundred of his compatriots to America on board the S. Curling. A very reluctant Daniel Daniels, the first counselor to Dan Jones in the mission presidency, assumed the editorship beginning with the eighth issue (12 April 1856) to the end of that year and all of the next.

As with the English translation of the seven preceding volumes of Zion’s Trumpet, this 1855 volume is published in a “facsimile translation” format to provide the reader with something of the appearance and flavor of the original Welsh publication.