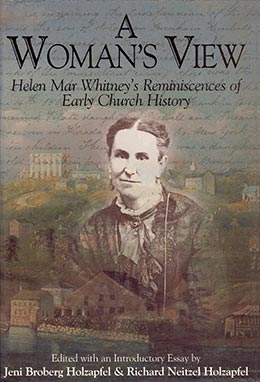 On 15 November 1896, family and close friends (including Emmeline B. Wells) gathered to Helen Mar Whitney’s bedside as she passed from this world at ten minutes after two in the afternoon. Emmeline was a close friend, confidante, and editor of Helen’s work published in the WOMAN’S EXPONENT. In a last tribute, Emmeline wrote an extensive obituary published in the 16 November 1896 issue of the DESERET EVENING NEWS entitled, “Helen Mar Whitney.—Her Death—A Sketch of her Personal History.”

The death of one of the best known and most estimable women of the Church, Sister Helen Mar Whitney, occurred yesterday, Nov. 15, 1896, at ten minutes past 2 P.M., at her residence in this city. At her bedside were several of her immediate family, and as the spirit left its earthly tabernacle, she raised her eyes, with a look of surprise, as though the room was full of people, and no doubt her escort was there.

All that love and faith and skill could do has been done in the tenderest and best manner for Sister Whitney, and for her there is no cause to mourn. She has entered into the rest prepared for the faithful which she so much desired, although it was hard for her to think of parting from her dearly beloved ones, who clung to her so fondly.

Sister Whitney was the wife of Horace K. Whitney, one of the Pioneers of 1847, who departed this life Nov. 22,1884—twelve years ago. Helen Mar was the eldest daughter of the late President Heber C. and Sister Vilate Kimball, and was born in Mendon, Monroe county, state of New York, August 22, 1828. Helen was in many respects very like her illustrious father, so much so that it has been said of her by one of his intimate associates, that she was his “best living representative.”

Sister Whitney was considered by all who knew her a remarkably strong character, and certainly she was a historic figure in the Church. Her parents were among the first to receive the Gospel in the State of New York, having been baptized in April, 1832, and removed to Kirtland in the fall of 1833. This journey Sister Helen remembered very well, and also her association with Elizabeth and Vilate, daughters of Brigham Young, whose mother had died; and Mrs. Kimball had charge of the two little girls, their father also traveling with Heber C. Kimball to Kirtland. Sister Whitney also remembered the terrible persecutions in Missouri, where she was baptized when a child. She also distinctly remembered the removal from that state to Commerce, afterwards Nauvoo, in the state of Illinois. During her childhood she was almost constantly associated with Joseph Smith the Prophet and his successor Brigham Young, and her recollections of these two great men, prophets, seers and revelators, were always interesting to those with whom she conversed. It was a pleasure and satisfaction to her to bear testimony of the divine mission of those two great leaders.

Helen M. Kimball was united in marriage to Horace K. Whitney, eldest son of Bishop Newel K. Whitney, on Feb. 3rd , 1846, in the Nauvoo temple just previous to the remarkable exodus of the Latter-day Saints from that beautiful city in the dead of winter, in which pilgrimage they shared the trials and hardships incident to the journey.

The next spring, 1847, her husband was called to go with the Pioneers, and during his absence and that of her father also, a little daughter was born and died. Horace and Helen Whitney came to the valley the following year, in Heber C. Kimball’s company which followed Brigham Young’s, leaving Winter Quarters on May 24th and arriving here early in October. On the plains a fine son was born to them, who died when five days old and was buried by the wayside. This grief added to the death of her first born was too much for the young mother, and she was not only very ill, but her reason was overthrown. Her mother was also very sick at the same time, and it seemed that only Brother Kimball’s mighty faith kept them alive. After arriving in the valley Brother and Sister Whitney made their home on the bank of City Creek, just east of where the Temple stands, where their other children were born, and where several of them passed away. Sister Whitney has borne eleven children, four sons and seven daughters. Of these two sons and five daughters grew to man and womanhood; one son and four daughters remain. Orson F. Whitney her eldest son, well and favorably known as preacher, poet and historian, is Bishop of the Eighteenth ward in this city, and occupies a chair of history and theology in the Brigham Young College in Logan.

Volumes might be written of Sister Whitney, her life and experiences in the Church. She was a woman of noble character and attributes and possessed of the most true womanly virtues, and in abundance that beautiful charity “that thinketh no evil.” And her compassion for the weak and erring partook of the sublime nature. She was a true heroine in every sense of the word; her sterling integrity to the Gospel and her zeal in the cause of truth were often strikingly exhibited. Her writings were forcible and telling, and she had a natural gift for heroic composition. Her reminiscences of Nauvoo and the early days in the Church were published in the Woman’s Exponent, covering a number of years and were greatly appreciated by the sisters. She also wrote occasional articles for the Deseret News when any particular subject fired her enthusiasm for the people and the cause she loved. She possessed great mentality and spirituality, and was intensely poetical, prophetic and patriotic in her nature; and excelled most women in certain lines of writing. She was the author of two books upon the subject of plural marriage, entitled, “Plural marriage as taught by Joseph the Prophet,” and “Why we practice plural marriage.” These books have gone the world over, and are often inquired for by strangers who were always delighted to see and converse with the woman who wrote them.

Sister Whitney was for many years prominent in the Relief Society and her testimonies to the truth will never be forgotten. She discharged every duty and responsibility placed upon her, whether temporal or spiritual, faithfully. She was a devoted Christian mother and trained her children in the love of the Gospel. Her love for her friends was true as steel, whether in prosperity or adversity. We who remain are bereaved indeed, but we know she was beloved of God, and therefore we say “Thy will be done.”