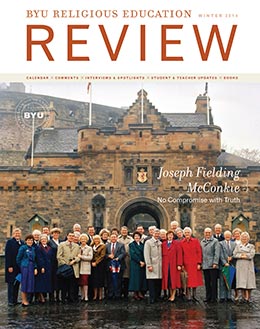 Dana M. Pike (dana_pike@byu.edu) was associate dean of Religious Education when this was published.

Donald W. Parry (donald_parry@byu.edu) was a professor of the Hebrew Bible in the Department of Asian and Near Eastern Languages at BYU when this was written.

Both have extensively researched and published on the Dead Sea Scrolls and Hebrew Bible.

The Leonardo Museum in Salt Lake City is currently hosting a major exhibit titled “Dead Sea Scrolls: Life and Faith in Biblical Times” (http://www.theleonardo.org/landing). The exhibit runs through April 27, 2014. Fragments of the scrolls on display include some of the oldest biblical manuscripts, as well as fragments of Jewish religious texts not included in the Bible.

The scrolls and fragments thereof were discovered in caves around Qumran, near the northwestern portion of the Dead Sea, about ten miles south of Jericho. The majority of the scrolls are written in Hebrew, the language of the ancient Israelites, although some are in Aramaic and a few are in Greek. Discovered from 1947 to 1956, these documents have proven to be significant in several ways (some other texts were subsequently found in other caves in the Judean wilderness, south of Qumran, along the western side of the Dead Sea; these are sometimes included under the designation Dead Sea Scrolls).

The scrolls include the world’s oldest extant texts of books in the Hebrew Bible (what Christians call the Old Testament), which are more than 1,000 years older than the oldest complete traditional Hebrew Bible, called the Masoretic Text (from whence came the King James and other Bible translations). Although many of the biblical texts from Qumran are similar to what became the traditional text of the Hebrew Bible, some of them preserve different readings for some passages. Modern Bible committees have employed several of these differences in new translations of the Bible. The scrolls also illustrate what biblical texts looked like during the century preceding the Christian era and help reveal how the Old Testament books were transmitted in earlier centuries.

The nonbiblical Qumran manuscripts are primarily religious texts. They provide a wealth of information about the variety of beliefs and practices of Jews living in the land of Israel shortly before and during the mortal ministry of Jesus Christ. Scholars label some of these texts “sectarian,” since they seem to have been unique to the Jewish sect (Essenes) represented at Qumran (e.g., Community Rule, the War Scroll, Commentary on Habakkuk). Other texts preserved at Qumran circulated more widely among Jewish people of the time (e.g., Jubilees, 1 Enoch, Psalm 151). The scrolls are thus significant for individuals studying Jewish religion and literature during the latter portion of the Jewish Second Temple period, as well as for those interested in a better understanding of the Jewish background of Jesus’ ministry. (There are no New Testament texts preserved among the Dead Sea Scrolls.)

Jewish scribes and copyists generally possessed a high level of competence as they transmitted religious texts from generation to generation. Various scribal conventions are evident in the scrolls. Some, for example, contain various marks and notes indicating scribal corrections and other practices.

For these and other reasons, the Dead Sea Scrolls are considered one of the greatest manuscript discoveries of the twentieth century. The scrolls have been and continue to be the focus of thousands of books, articles, and dissertations; two academic journals are dedicated entirely to their study, and academic conferences continue to discuss their significance.

The community at Qumran considered itself God’s covenant people who lived in the last days before the coming of the Messiah and the end of the world; thus the scrolls contain certain themes that resonate with Latter-day Saints. However, it is important to realize that there are no uniquely LDS doctrines purely preserved in the Dead Sea Scrolls.

On display with the scroll fragments are more than six hundred objects from Israel, most dating from about 700 BC to AD 200, some of which have never before been publicly exhibited. Visitors will see a three-ton stone from Jerusalem’s Western Wall (sometimes called the Wailing Wall), the remains of religious artifacts such as small altars and figurines, weapons of war, textiles, beautiful mosaics, and everyday household items such as jewelry and ceramics. The Leonardo Museum has agreed to cut the usual admission price in half for BYU students, faculty, and staff (you must show a current, valid BYU ID). The Leonardo Museum is located at 209 East 500 South, Salt Lake City.

Scholars at BYU have helped translate, publish, and digitize the scrolls. A room near the entrance to the exhibit highlights BYU’s involvement with the Dead Seas Scrolls during the past twenty-five years, including the work of professors Dana M. Pike, David R. Seely, and Andrew C. Skinner in Religious Education and professor Donald W. Parry in the Hebrew section of Asian and Near Eastern Languages. In connection with the exhibit, these and other professors are participating in a series of free public lectures on Thursdays at 7:00 p.m. at the museum.

On April 11–12, 2014, toward the close of the exhibit at the Leonardo Museum, there will be an academic conference on the theme “The Prophetic Voice at Qumran and Contemporary Communities.” Professors Emanuel Tov (Hebrew University), Eugene Ulrich (Notre Dame), and James VanderKam (Notre Dame) will be the keynote speakers. Among other presenters are Religious Education professors Matt Grey, Shon Hopkin, Dana Pike, and David Seely and Professor Donald W. Parry from Asian and Near Eastern Languages (see the Leonardo’s website for further information).

Articles in Studies in the Bible and Antiquity 2 (2010) (available at http://publications.maxwellinstitute.byu.edu/periodical/studies-volume-2-issue-number-1/)

Recent, reliable, accessible overviews of the scrolls and their significance