The small branch of Latter-day Saints who called Worms their home strove in 1939 to maintain the programs of the Church. Of the thirty-three members of record, eighteen (55 percent) were females over twelve years of age and only four men and boys held the priesthood. The solitary elder was Friedrich Tisch, and his wife, Karoline, was the Relief Society president. The only other surname listed on the branch directory of June 1939 was Hammerle (Ellen, the leader of the YWMIA). [1]

In the fall of 1939, the Worms Branch held meetings in rented rooms at Renzstrasse 5. Sunday School began at 10:00 a.m. and sacrament meeting at 8:00 p.m. Mutual was held on Thursdays at 8:00 p.m., and the Relief Society met on Tuesdays at the same hour.

As of this writing, the only surviving member of the wartime Worms Branch is Renate Tisch (born 1924). Her family lived at Gaustrasse 64 in the northern Worms suburb of Neuhausen. Friedrich Tisch was an employee of the Reichsbank and had moved his family to the city in 1926. Renate recalled the meeting location and the members:

Before we moved in, another religious group had used the rooms. We met in the back. There was one small room and a nice, big room. We were able to hold all our meetings there but had to be careful about what we taught and said and what hymns we sang. Our branch wasn’t very big—it consisted of my family, Sister Müller’s family, and the Spengler family. I would say that we were about fifteen people in attendance. We did not have any pictures or special decorations on the wall or in the room. But there was a sign at the street that indicated that we met in those rooms. We didn’t have any Primary class because there were no children. [3] 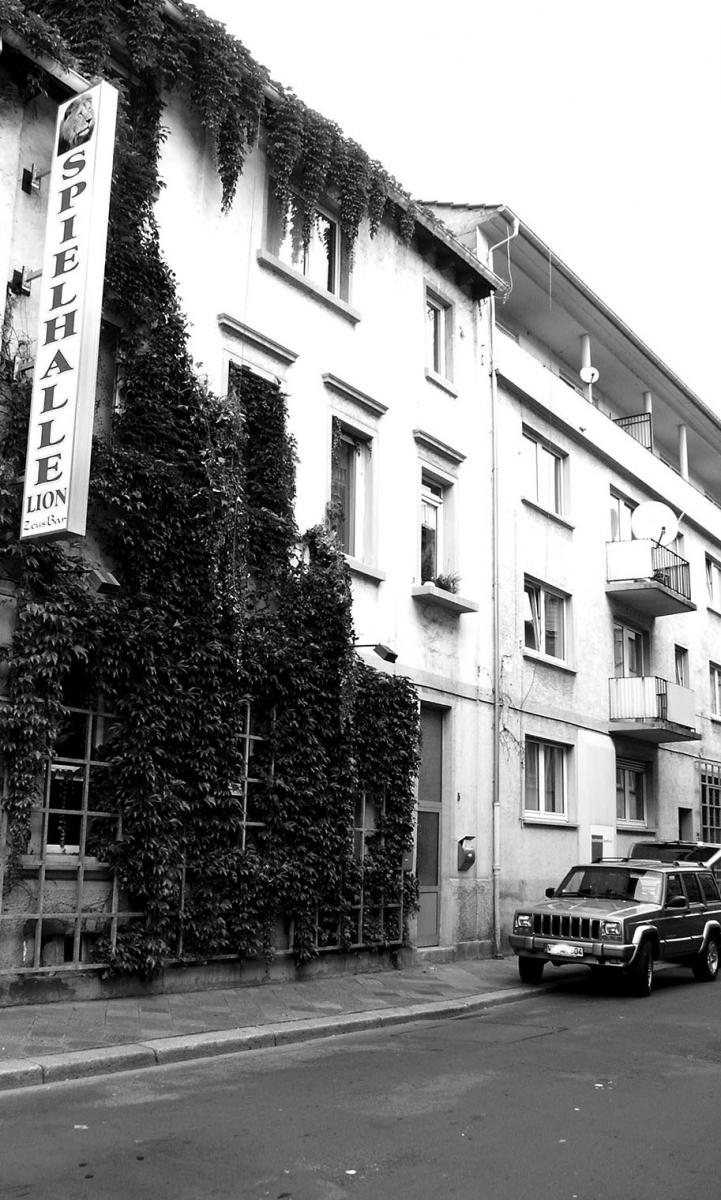 Upon completing her schooling at age fourteen, Renate was called to work for one year on a farm. Her assignment was to the Spindler farm only about twenty minutes from her home, and she was allowed to go to church on Sundays. Her pay was only 5 Reichsmark (about $1.50) per month.

American missionary Walter Scoville had served in Worms just before the war and maintained correspondence with the Tisch family before the United States entered the war in December 1941. He received an encouraging letter written by Friedrich Tisch on March 4, 1940, that included these lines:

Brother Scoville, you needn’t worry about us. We are not in need in any way. We have enough to eat and drink, more than we need. After all, we can’t do more than eat until we’re full every day. . . . More news: Sister Hammerle had a baby boy on September 21 last year. . . . And Sister Müller had a baby boy just before Christmas to keep the family name alive. Other than that, nothing is different. We still hold our meetings as always. . . . We still have the clothes we washed for [Elders] Kuhn and Oldroyd [when they left the country in August 1939]. We could not send it to them in Holland because there wasn’t enough time, . . . and they haven’t written to us. We will keep the clothes here until the missionaries come back. [4]

Young Renate Tisch was destined to serve her country in several capacities away from home during the war, but she was still in Worms when an air raid left the branch meeting rooms in rubble. In her recollection, “We went to church every Sunday, and when we went that one day our building was gone. Everything was lost that we had in our meeting rooms. But we kept our songbooks at home. Since we weren’t many people in the first place, we organized meetings in our living room.” For the duration of the war, worship services in the Worms Branch took place in the homes of the members, usually the Tisch family’s apartment.

“We covered our windows with something similar to black blankets in the evening,” Renate explained,

If there was a light, the [air-raid wardens] would come after us. We would always go into the air-raid shelter together, and I would make sure that I sat next to my family. If we died together, it would be all right. We had light in the air-raid shelters and took our flashlights. We also took a suitcase with us, with maybe a dress and underwear in it. My dad had important papers in his suitcase. When the alarm came, we grabbed our belongings and went. Our home was damaged during air raids, but we were still able to live in it.

At age eighteen, Renate answered the call of the Reichsarbeitsdienst and was sent south to the town of Zell, in the Wiesenthal valley in Baden. She described the situation in these words:

That was quite a long ways away from home for me. [Our leaders] taught us everything we should know about the Allies. They told us from which side each country would come and how we could conquer America. I lived in a brand-new house during that time. It was built just for us girls. Upstairs it had five big rooms and downstairs, we had other rooms. By 10:00 a.m. we had to go out to work for the farmers or families with many children where the husband was serving in the military. During the year I was there, I did not have the opportunity to attend chrch. But I was able to go home for a couple of weeks once.

Renate had been fortunate to meet a fine young LDS man at a mission conference. She recalled that Anton Huck carried photographs of young people in the mission. (“It seemed that he wanted us to fall in love.”) Paul Eysser was a member of the Nuremberg Branch and was serving in the military near Worms. This allowed him to attend church meetings in the home of the Tisch family. “I got to see him quite a lot for a few weeks, and he wrote letters too,” recalled Renate.

Renate and Paul were married at city hall in Worms on October 9, 1943, and then traveled to Nuremberg where the branch (the second largest in the mission) celebrated with them. Kenate recalled:

All the branch members were there, and it was a big feast. My parents supplied geese, rabbits, and chickens. We also had dumplings and vegetables. At least forty people were there.

We found somebody to take the pictures and to bring some flowers. We had about one week together before Paul had to go back to his military duty.

With her husband gone again so soon, Renate went back to work. Her next assignment was as a civilian in an army office in Bensheim, only ten miles east of Worms. For a while, she was able to commute to work on the train, but eventually Allied bombers destroyed the bridge over the Rhine River, and Renate could not often make the longer trip south to Mannheim, across the river to Ludwigshafen and north to Worms. She spent the nights in Bensheim. All the while, her father (who was too old to be drafted) was conducting church meetings in his home, trying to keep the branch intact despite increasing absenteeism among the branch members.

“I worked in the payroll office. Soldiers weren’t paid much, but it was more than the 2,40 Reichsmark [60 cents] I was paid each month, along with room and board,” Renate explained. During the final months of the war, she was sent to Munich in Bavaria; her office was transferred there to stay out of the way of the invading Allied troops. She located a cousin in the Bavarian capital and was able to live in her apartment. “Munich was bombed terribly, and we spent a lot of time in the basement shelters,” she recalled.

Renate Tisch Eysser was still in Munich when the American army entered the city and the war ended. “There were many black soldiers who we had never seen before. I turned to my coworker and said: ‘My goodness! Look at that!’ But I wasn’t afraid of them. They were nice to us.” Shortly after the war ended, Renate looked for a way to return to Worms. That way was by rail in a coal car. She made it as far as Mannheim, where the American forces occupied the city. The French controlled the area across the river and initially made matters difficult for the young woman. Fortunately, she ran into Anton Huck, who directed her to the home of Eugen Hechtle, the district president, where she spent the night. The next day, Renate convinced the French guards to allow her to cross the river and proceed to her home in Worms.

Paul Eysser had been taken prisoner by the Americans at the end of 1944 and was sent to Missouri as a POW. He was released in 1946 and made his way first to Nuremberg and then to Worms, where he was reunited with his wife, as she recalled: “He came home in April 1946. Nobody knew that he was alive. No messages could be sent through the Red Cross. Not even his parents knew where he was. The last thing that I had heard from him was that he was headed for Russia.”

Renate had the following summary comments about some of the spiritual trials that occur in wartime: “My mother always used to tell us that we have to have faith. That stuck with me. We had to believe that Heavenly Father would be with us. We prayed a lot. When we went into the air-raid shelters, the neighbors would feel relief and be happy that we were there. They believed that we brought some kind of peace and that made them less afraid of the situation to come.”

On December 26, 1946, President Tisch wrote a letter to his missionary friend, Walter Scoville, in the United States. The war had been over for eighteen months, and Brother Tisch was finally able to offer some good news about the conditions in Worms:

We have survived this terrible war, though there were several occasions when we were close to being killed. We lost our meeting rooms and were forced to hold meetings in our apartment. . . . The members of the Worms Branch were able to stay in their homes for the most part. Sister Mink lives in a different part of Worms, but was able to rescue her property. Our beautiful city became a victim of the air raids. . . . You know how close our home is to the railroad station. There are 22 bomb craters in the gardens around our home. But our home still stands and the damage it suffered has already been repaired. We have gone through very painful times, and every day we are still moving rubble out of our way. . . . We want to live as faithful Latter-day Saints and be prepared to bear testimony of the truth of the Restoration. . . . By the way, our daughter Renate married an elder [Eysser] from the Nuremberg Branch back in October 1943. He was a POW in Missouri for a year and just returned in April [1946]. [5]

The Worms Branch had survived World War II and the members were looking forward to gathering together to worship in peacetime.

No members of the Worms Branch are known to have died during World War II.