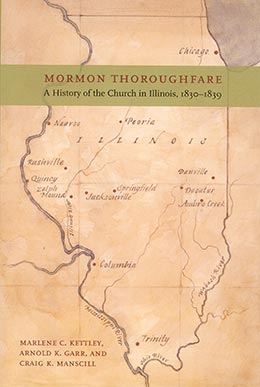 When we contemplate the history of The Church of Jesus Christ of Latter-day Saints in Illinois, our thoughts naturally turn to the remarkable events that took place in and around Nauvoo in the early 1840s. However, several important events transpired in the state during the 1830s, before the Mormons ever settled Nauvoo. Unfortunately, many of these episodes have not received the attention they rightfully deserve. This book, therefore, attempts to help rectify that deficiency.

During the 1830s, Illinois, more than any other state, became the great Mormon thoroughfare between the Church’s two official gathering places of Ohio and Missouri. This, therefore, became the dominant feature in our research and is the overall theme for this volume.

Indiana was also part of that thoroughfare, but we argue that it was involved to a lesser extent than Illinois for at least two reasons. First, Mormons entered Illinois in 1830, a year earlier than Indiana. Second, Latter-day Saint activity in Illinois greatly overshadowed that of Indiana in 1838 to 1839, when Quincy became the chief city of refuge for the Saints. This happened after Governor Lilburn Boggs forced the Mormons out of Missouri with the extermination order and before the Church designated the city of Commerce (later Nauvoo) as its official gathering place.

The missionaries to the Lamanites were the first Latter-day Saints to travel the Mormon thoroughfare of the 1830s. These elders did not originally plan to journey through Illinois. They intended to take a steamboat from Cincinnati, Ohio, to St. Louis, Missouri, by way of the Ohio and Mississippi rivers. However, the steamer was forced to stop in southern Illinois because the Ohio River was “blocked with ice.” The missionaries were, therefore, forced to make their way up the southwest corner of Illinois by foot. The elders did not leave a record of their exact route, so in chapter 1 we theorize that they took the most direct and most traveled course—the mail route, which had been established twenty years earlier. These missionaries stayed in Illinois until “the beginning of 1831” when they crossed the Mississippi River and entered the state of Missouri. Therefore, Illinois was one of only four states in the Union that received Mormon missionaries in 1830, the year the Church was organized. The other states were New York, Pennsylvania, and Ohio.

The next Church members to travel the thoroughfare through Illinois were several pairs of missionaries who were called by revelation on June 7, 1831, to journey from Ohio “to the land of Missouri” (D&C 52:3). They were instructed to travel by different routes and preach the gospel along the way. In chapter 2 we trace some of their activities and discover that their efforts resulted in the first Mormon baptisms in Illinois.

Between the years 1831 and 1834, missionary work intensified in Illinois. While some new converts chose to move immediately and gather with the Saints in either Independence, Missouri, or Kirtland, Ohio, others decided to stay in Illinois, at least for a few years. One of those was Charles C. Rich, an Illinois convert who eventually became an Apostle. Chapter 3 contains the story of Rich’s conversion, and that of Church members who fought in the Black Hawk War in northern Illinois. In addition, the successful missionary activities of Parley P. Pratt and William E. McLellin in Greene County are reviewed.

One of the most dramatic episodes in Latter-day Saint history was the march of Zion’s Camp. Joseph Smith formed this military organization in 1834 for the purpose of reclaiming members’ property lost in Jackson County, Missouri. This army also traveled along the Mormon thoroughfare. In chapter 4 we follow its movements, with special emphasis on activities in Illinois.

By 1835 missionaries had already labored in almost every county in Illinois, and five hundred members lived in the state at that time. This is a remarkable number for such a new religion, especially since many converts had almost immediately migrated to one of the Church’s two gathering places. Nevertheless, those Saints who chose to stay in Illinois for a season were organized into branches, and capable men such as Charles C. Rich were called to preside over them. Chapter 5 revisits Elder Rich’s story and follows his roles as branch president and missionary. This chapter also reviews the missionary activities of Edward Partridge and Thomas B. Marsh in central Illinois. In addition, it tells the story of a conflict in Ash Grove, Shelby County, that the local residents referred to as the “Mormon War.”

By early 1838, the number of Latter-day Saints traveling along the Mormon thoroughfare increased dramatically. Severe financial problems and the disgraceful defections of several Church leaders led to a “great apostasy” in Kirtland, Ohio. As a result, Joseph Smith and hundreds of faithful members fled Ohio and journeyed through Illinois to Missouri. Many were organized into a body called Kirtland Camp. Chapter 6 gives an account of their formidable journey.

By far, the most important episode of Latter-day Saint history in Illinois during the pre-Nauvoo decade took place in 1838–39. Literally thousands of Mormons flooded into Quincy, Illinois, from Missouri following Governor Boggs’ extermination order. Chapter 7 relates the story of that heart-wrenching exodus. During this time, Brigham Young and the Quorum of the Twelve Apostles demonstrated superior leadership while Joseph Smith and the First Presidency were imprisoned in Liberty Jail.

In the spring of 1839, the Church designated Commerce, Illinois, as the new official gathering place. This marked the end of an era when Illinois played the role as a thoroughfare between two gathering spots outside of the state. For the next seven years Nauvoo, Illinois, would become the center of the one great gathering place for Latter-day Saints in America.