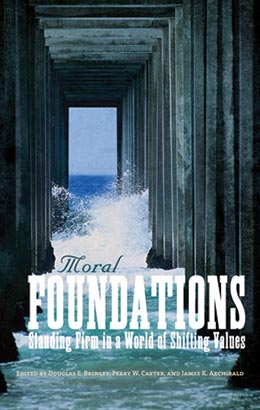 Moral Foundations: Standing Firm in a World of Shifting Values

Both by doctrine and by covenant, members of The Church of Jesus Christ of Latter-day Saints are compelled to be men and women of character, honesty, and integrity in their personal and professional lives. As students attend Brigham Young University, graduate, and move out into the community and various chosen careers, they have an obligation to maintain the highest standards of integrity. In the workplace, whether they are employees or employers, they must be immune to improper incentives, social and corporate pressures, and shortcuts designed to enhance balance sheets at the expense of integrity and sound, acceptable business practices.

Integrity is a matter of behavior, sound thinking, and an attitude that honesty is essential to good business and engineering practices. Adherence to a code of professional integrity has its foundations in the doctrines of the Restoration, particularly the knowledge that we are all sons and daughters of God and face eventual accountability for our words, works, and thoughts (see Alma 12:14). Church membership compels Latter-day Saints to be trustworthy and immune from political, financial, or personal corruption in a world where such traits are fast losing ground to economic expediency and personal greed.

In the spring of 2006, representatives from both the Ira A. Fulton College of Engineering and Technology and College of Religious Education at Brigham Young University met to organize a symposium to address issues of integrity in the professional arena. Drs. Val Hawks, Ronald E. Terry, and Stephen E. Benzley had previously taught courses addressing these issues for engineering and technology majors. The course had offered religion credit but was discontinued fall semester of 2006. However, the topic was of such importance that we decided to hold a symposium to remind students entering professional careers of their obligation to the university and its sponsoring institution.

Representatives from Religious Education—Douglas E. Brinley, Kent Brooks, and Guy L. Dorius—joined with engineering and technology faculty to organize a symposium that was held March 1–2, 2007. Elder Richard G. Scott of the Quorum of Twelve Apostles of The Church of Jesus Christ of Latter-day Saints, a nuclear engineer himself, was enthusiastic in supporting the symposium theme and became its keynote speaker.

The symposium was titled The Gospel: The Foundation for a Professional Career and included Brigham Young University faculty from both colleges and speakers from actual engineering companies. Most notably, Firoz “King” Husein, CEO of Span Construction Company, and Mary Peery, formerly of Hewlett-Packard, addressed topics of honesty and integrity in the professional arena.

Dean Alan R. Parkinson of the Ira A. Fulton College of Engineering and Technology and Dean Terry B. Ball of Religious Education encouraged the symposium and were extremely helpful in supporting the logistics and theme of the program.

This book contains the addresses of the presenters and argues for greater integrity in professional life. The need to emphasize this topic has become even more critical as recent examples of corporate greed and individual dishonesty on the national scene call for a higher behavioral standard in professional and personal ethics.

Our thanks to the Religious Studies Center at Brigham Young University for help in bringing this symposium to a public awareness. Richard Neitzel Holzapfel, Devan Jensen, and their capable staff were most helpful in making this publication available in book form to a larger audience.