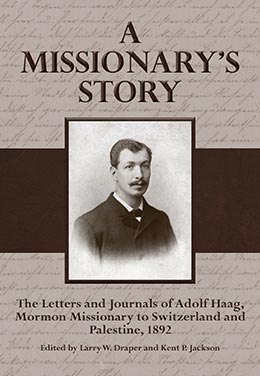 The Letters and Journals of Adolf Haag, Mormon Missionary to Switzerland and Palestine

The first Latter-day Saint visitor to the Holy Land was Elder Orson Hyde, who in October 1841 traveled to Jerusalem and dedicated the land “for the gathering together of Judah’s scattered remnants, according to the predictions of the holy prophets . . . and for rearing a temple in honour of [God’s] name.”[1] Other visits of Church leaders followed, often including prayers and dedications in behalf of the land and its inhabitants.[2]

The first continuous Latter-day Saint presence, however, began in August 1886, when Elder Jacob Spori arrived in the port town of Haifa to preach the gospel and establish the Church there. Spori had been sent to Haifa to introduce Mormonism to a group of a few hundred German immigrants who had founded a religious colony next to the town. Their organization, the Temple Society, began in Germany with the intent of preparing a righteous people for the Second Coming of Jesus. Colonists from the group were in Palestine to redeem the land through faith and righteous works.

Shortly after his arrival, Spori converted and baptized a man by the name of Georg Grau, who thereby became the first Latter-day Saint convert in the Holy Land. Georg’s wife, Magdalena, joined the Church also. She died in 1888 and was buried in Haifa’s German Colony cemetery. Georg was buried there in 1901. Elder Adolf Haag died in Haifa in 1892 and was buried there also, as was another missionary, Elder John A. Clark, who died in 1895. Over time, about twenty German colonists joined the Church. Most emigrated to America, but two other converts died in Haifa and were buried in the German cemetery: Friedrich August Kegel, who died in 1889, and Christiane Kegel, who died in 1899.

Beginning with Georg Grau’s baptism in 1886, there were Latter-day Saints in Haifa off and on until the 1930s. During that time, several missionaries from America served there. On two occasions, 1927–28 and 1933–35, Haifa was the headquarters city of LDS missionary work in the Middle East, and the Church had mission homes in the town’s German Colony area, not far from where Georg Grau had once lived.[3]

In 1979, President Spencer W. Kimball announced that Brigham Young University would construct a study center in Jerusalem. BYU study programs had been in operation there since 1968, and a permanent facility for the program was needed. But for some, the news was not welcome. Latter-day Saints are known as missionary-minded people who take seriously Jesus’s injunction to go “into all the world, and preach the gospel to every creature” (Mark 16:15). Jews in America and Israel were worried that a large Mormon building would become a base for missionary operations targeting Jews. Protests began, and they lasted for a few years while the facility was being built. As a result, the Church and the University had to go to great lengths to obtain all the approvals that were required for its construction.

Many Latter-day Saints have heard the story that the missionary graves in Haifa made it possible for BYU and the Church to achieve legal recognition and to obtain permission to build the Jerusalem Center. The story is that the graves provided evidence of a Latter-day Saint presence in the land before the creation of the State of Israel in 1948—evidence that was required to obtain legal status and approval for the BYU facility.

Though the graves certainly show that Latter-day Saints were in the land at an early date, the story itself is not true.

In the mid-1970s, several years before the Jerusalem Center was under construction, Church leaders recognized the need to obtain legal recognition for the Church in Israel, just as is done in other countries.[4] Official recognition would facilitate activities such as the opening of bank accounts, the transfer of money, and the purchase of property. The highest form of government recognition of a religion was held only by groups with lengthy histories in the Holy Land. The Christians who had that kind of status had been there for centuries—the Roman Catholic Church, the Greek Orthodox Church, the Armenian Orthodox Church, and the Anglican Church. As relative newcomers, Latter-day Saints had little chance of joining that group. David B. Galbraith, who was both the president of the Jerusalem Latter-day Saint branch and the resident director of the BYU program, set out to obtain the recognition. To demonstrate that the Church had been in the land prior to the establishment of the State of Israel, he looked to see if there was evidence of Church ownership of the two mission homes in Haifa. No such evidence was found, however, because the Church had only rented the buildings. But the graves of the two missionaries were evidence of an official Latter-day Saint presence as early as the 1890s.

Obtaining the status the older churches enjoyed turned out to be neither possible nor necessary. For the Church’s purposes, Galbraith did not need the evidence of the graves. He did not include mention of them in the applications, and he was able to obtain legal recognition without reference to the Church’s history. Similarly, the existence of the graves was not a factor in the process of obtaining approval for the Jerusalem Center.

It was probably this set of circumstances that led to the story that the Haifa graves made possible the recognition of the Church and the construction of the BYU Jerusalem Center. Many were aware at the time of the search for evidence of an early Latter-day Saint presence, and the story was passed on then and continues to be passed on now—by tour directors, tourists, teachers, and others. In the meantime, the graves stand as monuments to the sacrifice of faithful Latter-day Saint missionaries who gave their lives in the service of God.

[4] This account is based on Galbraith’s recollections in David B. Galbraith and Blair G. Van Dyke, “The Jerusalem Center for Near Eastern Studies: Reflections of a Modern Pioneer,” Religious Educator 9, no. 1 (2008): 34–36, and on the author’s conversations with Galbraith in September 2014.