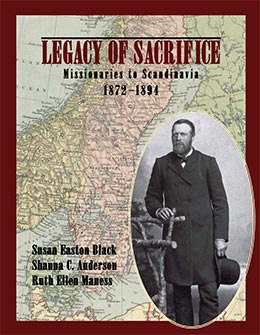 Legacy of Sacrifice: Missionaries to Scandinavia, 1872–94

About the Authors, Contributors

Susan Easton Black grew up in Long Beach, California. She joined the faculty of Brigham Young University in 1978, after receiving her bachelor’s degree from BYU in political science and history, a master’s degree from California State College in counseling, and a doctorate degree from BYU in educational psychology. She is currently a professor of Church History and Doctrine and a former Associate Dean of General Education and Honors.

Dr. Black has been the recipient of several awards for her publications. In 1999, she received the highest national award for the best-written university independent study course on the Internet. The focus of the course is “Finding Your Roots”—the basics of family history research.

Her lifelong pursuit of genealogy is best evidenced in her publications. Members of the Church of Jesus Christ of Latter-day Saints, 1830–1848 is a fifty-volume text that is used worldwide, as are many of her other genealogical publications. She is delighted to join with scholars Shauna C. Anderson and Ruth Ellen Maness in compiling readily accessible information in text form on the early Latter-day Saint Scandinavian missionaries.

Shauna C. Anderson was born in Salt Lake City, but at the age of two, Teton, Idaho, became her home. She graduated from South Fremont High School in St. Anthony. She then commuted to Ricks College in Rexburg for two years before transferring to Brigham Young University in Provo, Utah. She obtained her BS degree from BYU in medical technology.

Following graduation, she completed a one-year internship at Utah Valley Hospital and then continued to work in the laboratory there. She served as student coordinator and became involved in research and development. Eventually, she returned to school as a part-time student and earned an MS degree in medical technology from the University of Utah.

Always eager to accept new challenges, Shauna was instrumental in the development of the integrated medical technology program at BYU, where she became program director. Her education not yet completed, Shauna returned to school as a graduate student at the University of Washington, where she obtained her PhD in curriculum and instruction.

In addition to presenting workshops, her other professional activities include numerous publications ranging from journal articles to books. She is actively involved in the clinical laboratory profession at the state and national level. She is a professor in the Microbiology department and currently serves as the Biology office director. Despite her busy schedule, she manages to find time for shopping, sports, and genealogy.

Ruth Ellen Maness was born in California, but she has spent most of her life in Utah. Early work experiences included employment as a library attendant, and archives and correspondence specialist for the Genealogical Library. In the early 1970s, she had the opportunity of working with the wonderful people in Germany. While studying for her BA in languages, history, and family history from Brigham Young University, and her Accredited Genealogist (AG) certificate, she also worked and continues to work as a professional genealogist. In 1978 she was asked to join the reference staff of the international unit of the Family History Library in Salt Lake City. Assignments there have included developing training programs for staff and missionaries; teaching patron, staff, and missionary classes; writing research outlines; assisting with research guidance work; creating word lists, maps, and research aids; answering correspondence, e-mails, faxes, and telephone calls from around the world; and working with patrons to interpret records and guide them in their research efforts.

Other activities have included lecturing at major genealogical conferences and seminars such as Brigham Young University Genealogy and Family History conferences, the Federation of Genealogical Societies (FGS) conferences, the National Genealogical Society (NGS) conferences, the Salt Lake Institute sponsored by the Utah Genealogical Association (UGA), and numerous others. She is a member of the Association of Professional Genealogists (APG) and other professional organizations. She has taught family history classes at the university level since 1993, and has recently completed writing a “Scandinavian Research” independent study course for Brigham Young University. In addition, she writes a bimonthly column, “Scandinavia —Questions and Answers,” for Heritage Quest Magazine.

Her professional genealogical research pursuits have included field trips to archives and record offices in Germany, England, Poland, Canada, and the U.S. Midwest, East, Northeast, and South. In her “spare time” she likes to read historical biographies and westerns.

Dates have been added to distinguish between individuals with the same name.

Nanette A. Olson of Santaquin, Utah

Bertha A. Riddle of Madrid, Spain

Marilyn A. Nielsen of Lehi, Utah

Barbara U. Carter of Morgan, Utah

Claris A. Stauffer of Ogden, Utah

Saul A. Clark of Grantsville, Utah

Golda A. Adams of Salem, Utah

Gaylord A. Ensign of Fresno, California

Ida A. Durfee of Grantsville, Utah

Floyd A. Swenson of Seattle, Washington

Rosaland B. Thornton of Bountiful, Utah

Gustave B. Dewey of Provo, Utah

Ruth B. Kjar of Manti, Utah

Edith B. Morgan of Manassa, Colorado

Jeane B. Eagan of Alamosa, Colorado

Helen B. Jensen of Bountiful, Utah

Helen B. Jensen of Bountiful, Utah

Laura A. Nitsos of Sacramento, California

Maurine B. Guymon of Roseville, California

Francille B. Hansen of Scottsdale, Arizona

Floyd A. Swenson of Seattle, Washington

Douglas A. Smith of Roy, Utah

Glade A. Johnson of Kearns, Utah

Glade A. Johnson of Kearns, Utah

Judy A. Frazier of Spring, Texas

Jerold B. Carver of Clearfield, Utah

Patricia B. Clark of Redmond, Washington

B. Allen Bunker of Mesa, Arizona

John A. Lindquist of Ogden, Utah

Ruth B. Harris of Orem, Utah

Crystal A. Christensen of Logan, Utah

Richard A. Sorensen of Hyrum, Utah

Leann B. Call of Broomfield, Colorado

Ruby B. Bradfield of Orem, Utah

Virginia B. Petersen of Clearfield, Utah

Lois A. Petersen of Smithfield, Utah

Rulon A. Swenson of Boise, Idaho

Floyd A. Swenson of Burien, Washington