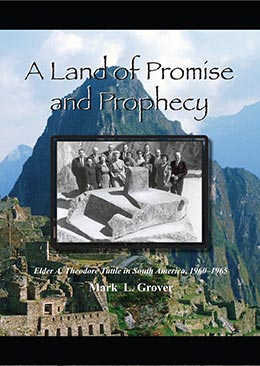 A Land of Promise and Prophecy

For many years I regularly ate lunch with A. Delbert Palmer, an early Latter-day Saint missionary in Argentina, the first president of the Chilean Mission, and a colleague at Brigham Young University. Our conversations almost always centered on the history and development of the Church in Latin America. One specific discussion in 1998 remains vivid in my mind. I asked which moments in South America were so pivotal that the direction of the Church was permanently altered. After quickly making his list, he focused on the period he felt was most important, 1960–65. In 1960, Elder A. Theodore Tuttle of the First Council of Seventy toured South America and from 1961 to 1965 he served in Uruguay as president of the South American Mission. During this time, the Church made significant changes that resulted in what we have today. President Palmer said it was imperative that this story be written soon because most of the mission presidents from that period were still alive and most had good records of their experiences. However, almost all were in their eighties and needed to be interviewed soon. He was correct in that assertion because from the time of our discussion half of the mission presidents have passed away, including President Palmer himself.

We talked for several months about the project and made plans on how to write the book. I suggested President Palmer be the author, which he refused. I decided to accept the challenge. Though Elder Tuttle passed away in 1986, his widow, Marné, was still alive and active. She brought the mission presidents and wives together, and they accepted the proposal to write a book about their experiences. They were all open to my requests for interviews and allowed me to see copies of documents in their possession. Sister Tuttle was particularly helpful and allowed me to see all her materials, including private diaries kept during this time. Access to these private personal collections was essential because many of the administrative documents of the period housed in the Church History Library in Salt Lake City were not made available to me. I treasure my experiences with these exceptional men and women.

The result is a narrative history focusing on the years of 1960, when Elder Tuttle first toured the region, to 1965, when he and his family left South America and returned to Salt Lake City. This period is key to the evolution of the Church because it represents a significant adjustment in approach and direction, particularly from Church headquarters in Salt Lake City. Many of the changes began before 1960 and continued beyond 1965, but this period saw the greatest changes. This history focuses on the personalities and programs of the mission presidents, with a particular emphasis on the activities of Elder Tuttle, because the changes that occurred during this period were the product of these men and women. The story of the members in South America is included but is not as prominent because the roles and activities of the missions are the key to understanding the Church at this time. The local members and leaders became more important after the organization of stakes in 1966.

This book will be of greatest interest to missionaries who served in Latin America. I have not avoided discussing issues and concerns of the time, but my focus is on telling the story, generally from the viewpoint of President Tuttle and the mission presidents. In doing so, I am following advice received many years ago at Indiana University from my PhD adviser and professor, Charles Boxer, the great Portuguese and Jesuit scholar. After becoming frustrated with my attempts to use academic theory and analysis in a paper I was writing, he stopped me in the middle of one explanation and said, somewhat irritated, “Grover, just tell the story.” That piece of advice has influenced me by making sure the story is the key element of my writing.

Though the nucleus of the book is on Elder A. Theodore Tuttle, it is not a biography of him but an examination of the history of the Church in South America during these five years. After the foundation of the story is established, each mission in South America is then discussed. Instead of doing a chronological history of each mission, I took one element of Elder Tuttle’s program and described the program in relation to what was happening in that mission. Consequently, this volume is also not a history of the country or mission during this time. To write the story in that way would have resulted in significant redundancy because much of the activities were similar in each mission. The exception was the Brazil South Mission. This mission was organized in 1959, two years before Elder Tuttle’s move to Uruguay. Two mission presidents served during this period: President Finn Paulsen for three years and then President Elmo Turner for the last months of the period. Unfortunately, President Paulsen passed away in 1979 and, as far as I have been able to determine, was never interviewed about his mission. I was also not able to interview his wife, Sarah, who passed away while the book was being researched. President Paulsen kept few documents during this period, and the official records of the Church have scanty information. Because of the lack of documentation, I covered the mission in the chapter on Brazil. The southern part of Brazil is important for the earlier period and will be examined extensively in a further volume on the history of the Church in Brazil that I am writing.

This book would not have been possible without the support and assistance of the Harold B. Lee Library at Brigham Young University. They not only gave me a leave of absence to write the book but also provided financial support during the process. Special appreciation goes to Stirling J. Albrecht, library director; Randy J. Olsen, assistant director; and Susan Fales, my friend and supervisor. Ronald K. Esplin, then of the Joseph Fielding Smith Institute of Latter-day Saint History at Brigham Young University, was particularly helpful in providing emotional support as well as a grant to support my leave of absence. The Religious Studies Center at Brigham Young University also provided financial assistance that was invaluable. I am grateful for their willingness to publish this volume. Richard Neitzel Holzapfel was particularly helpful and provided sound advice. Joany Pinegar was helpful in keeping the process going, and R. Devan Jensen—what a valuable and perceptive editor. Thanks also go to Elizabeth N. Hixson, Rachel A. Grover, Heather C. Jacobsen, Julia Toone Manning, and Rachel Morris.

Some of the archival research was conducted at the Church History Library in Salt Lake City. Particular appreciation goes to Michael Landon at the library, who was generous with his time and advice during the entire process. Michael is a good friend who shares my love for Latin America. Appreciation is extended to Gordon Irving, who conducted many of the oral interviews used in this project. Gordon is a master of the oral interview. Others in the library were of great assistance, including Ron Watt.

This project is as much Marné Tuttle’s as it is mine. She was always gracious and helpful in all aspects of the project. She opened her home and her life to me to assist in the project. The former mission presidents and their wives were supportive of the book, and their advice and support were valuable. Of particular importance was Delbert Palmer, with whom I had almost weekly contact during this project asking for advice and information. He allowed me to intrude on him and his family during his last trip to Chile, where we spent many hours talking about Chile and life in general. For his role, the book is dedicated to him.

There were many in South America who were helpful in the research process. Many were gracious in granting interviews and providing insight into the time period from the member point of view. I am particularly grateful to Néstor Curbelo, who is a colleague of many years. When I decided to write the draft of the book in Argentina, he graciously rented me a room where I wrote. His wife, Rosalina, was a wonderful support and friend during my stay. That time in Buenos Aires was one of the choice experiences of my life.

I had secretarial support from several Brigham Young University students. In particular was Heather Longhurst, who accepted the task of helping to prepare my interviews and notes for use. She was a wonderful support in the project.

I am particularly grateful to my family for their support during these years. I appreciate my two children, Anthony and Sylvia, who had the misfortune of being raised by a widowed father. They were both in college when the book was written but were supportive of my activities related to South America. Their mother—my first wife, Deborah, who passed away in 1990—was always supportive of my activities. I am especially grateful to Ivelisse, my second wife, who came into my life near the end of the project and brought great joy to me.

I have the utmost respect and admiration for those who are the participants in the story of the Church in South America, particularly during this period: the mission presidents who sacrificed so much for the Church and the missionaries who gave of their lives at such an early age. In particular, I admire the early members of the Church there who sacrificed and gave so much to a small growing religion. To them I extend my greatest love and admiration.