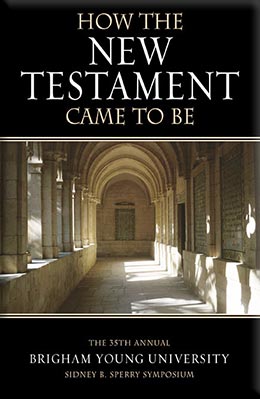 How the New Testament Came to Be

The 2006 Sidney B. Sperry Symposium, How the New Testament Came to Be, celebrates the writing of the New Testament and the faithful service of those who brought that book of sacred scripture into existence. In the papers contained in this volume, presented on the Brigham Young University campus in Provo, Utah, on October 27–28, 2006, authors explore the New Testament’s origin and examine ancient and scriptural evidence on a variety of related topics.

The New Testament presents us with many questions. Unlike the Book of Mormon, which was written anciently but was preserved for centuries to come forth in its purity in the latter days, the New Testament’s early history is in large part unknown. We do not know, for example, when, and under what circumstances, many of the documents were written. Nor do we know all the history of the texts from the time of their composition until centuries later when the earliest-known manuscripts were copied. We know that “plain and precious things” were removed from the scriptural text (1 Nephi 13:28), but because the original manuscripts do not exist, is there any way to find out from the earliest preserved documents what those “plain and precious things” were and when they were lost? What does modern revelation contribute to answer questions like this?

Similarly, the New Testament presents us with questions concerning authorship that are unknown from the Book of Mormon. What can we say about the traditional attributions of the Gospels to Matthew, Mark, Luke, and John? What can we say about how those and other books were collected to form the New Testament? Do the ancient manuscripts provide answers? What does modern revelation teach us?

We are grateful to have among our contributors Elder Alexander B. Morrison, whose introductory essay poses questions and points out uncertainties but emphasizes the centrality of faith in Christ and the indispensable role of modern revelation in biblical scholarship.

We thank the contributors to this volume and the contributors to the symposium for sharing with us the fruit of their research. And we thank generous colleagues at Brigham Young University who reviewed manuscripts and encouraged quality. We also thank Devan Jensen, Suzanne Brady, and the editorial and production staffs of BYU’s Religious Studies Center and Deseret Book Company for bringing this book to completion.