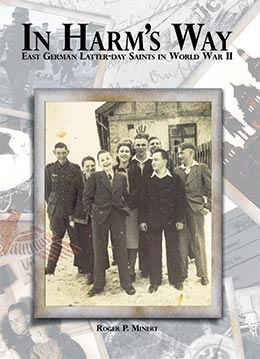 The port city of Rostock is situated near the mouth of the Warnow River, just five miles south of the Baltic Sea. The Lower Warnow River links Rostock to the town of Warnemünde on the coast. Just prior to World War II, Rostock had about 75,000 inhabitants and was home to a small LDS branch of sixty-eight members.

At the end of 1938, the branch was holding meetings in rented rooms at August Brackmann Strasse 23 on the second floor. From available mission records, it appears that the meetings continued there through much of the war but there were significant interruptions. For example, Hans-Jurgen Schlüter later recalled attending meetings in the home of the Stöckigt family in the last months of the war.[2]

A detailed history of the Rostock Branch has survived and provides insight into the lives of the Latter-day Saints living there during the years 1939–1945.[3] The following entries are representative of activities and events in the branch:

June 5, 1939: Branch President [Walter] Ruthenberg was activated by the Wehrmacht for special training.

January 14, 1940: Brother Rudolf A. Noss [of Rostock] was called to be the district president.

March 23, 1941: The work of the Relief Society has been suspended temporarily by District President Arno Dzierzon.

May 15, 1941: Brother Gustav A. Ebert of Neubrandenburg, Dümperstrasse 12, is called to be the president of the Rostock District.

May 17, 1941: Sister Elisabeth Keil died and was taken to Plauen/Voigtland [Saxony] for burial.

November 2, 1941: Brother [Richard] Ranglack, counselor to the mission leader, visited us today. Brother Walter Ruthenberg was released as branch president due to his call to the army. Brother Richard Stöckigt is called as the temporary branch president.

15 February 1942: It was announced in sacrament meeting that the Rostock District has been annexed to the Stettin District.

February 22, 1942: In order to help District President [Erich] Berndt of Stettin, Brother [Bruno] Rohloff of Neubrandenburg has been assigned as a traveling elder to visit our branch.

March 15, 1942: Mission Leader H.[erbert] Klopfer visited us. Beginning today, sacrament meeting will begin at 3 p.m. and will be followed by Relief Society.

May 3, 1942: Our meeting rooms were confiscated to be made available to people who have been bombed out or burned out of their homes.

October 25, 1942: Brother Joseph Kaiser, a deacon from the Schneidemühl Branch, visited us. He is in the army.

District conferences were a favorite experience of Latter-day Saints in Germany during the war and most were held on a regular basis through 1944. Rostock Branch members attended district conferences in Neubrandenburg (May 1940), Demmin (October 1940 and September 1941), at home (March 1941), and in Stettin (September 1942).

It is clear from the history that a branch as small as Rostock appreciated visits from members of other branches. The names of many visiting members—not just district and mission leaders—appear throughout the pages dated 1939–1943.

After losing and regaining their meetings rooms several times, the Saints of the Rostock Branch lost the rooms at August Brackmann Strasse 23 for good on April 21, 1943, when Allied bombers reduced the building to rubble.[5] The final entry of the Rostock Branch history is dated March 2, 19 44. The author of this fine record in not identified.

Bodo Ruthenberg (born 1939) recalled that his father, Walter Ruthenberg, was a saddler in the army. He was determined not to have to shoot at the enemy. After serving in France, he was transferred to Norway. He learned to ski there and became very fond of that country.[6]

Bodo’s mother, Erika Ruthenberg, had three little children to worry about when the bombs began to fall on Rostock. In April 1945, the area around her home at Kossfelderstrasse 6 was attacked by the Royal Air Force. According to Bodo’s recollections:

My mother tried to take furniture out of the apartment. She left some downstairs because she wanted to get more, but when she came back, everything had been taken by other people. We all just got out of the apartment and the basement when the house collapsed behind us—still burning. My mother carried me out holding me in her arms. We lost everything we had. 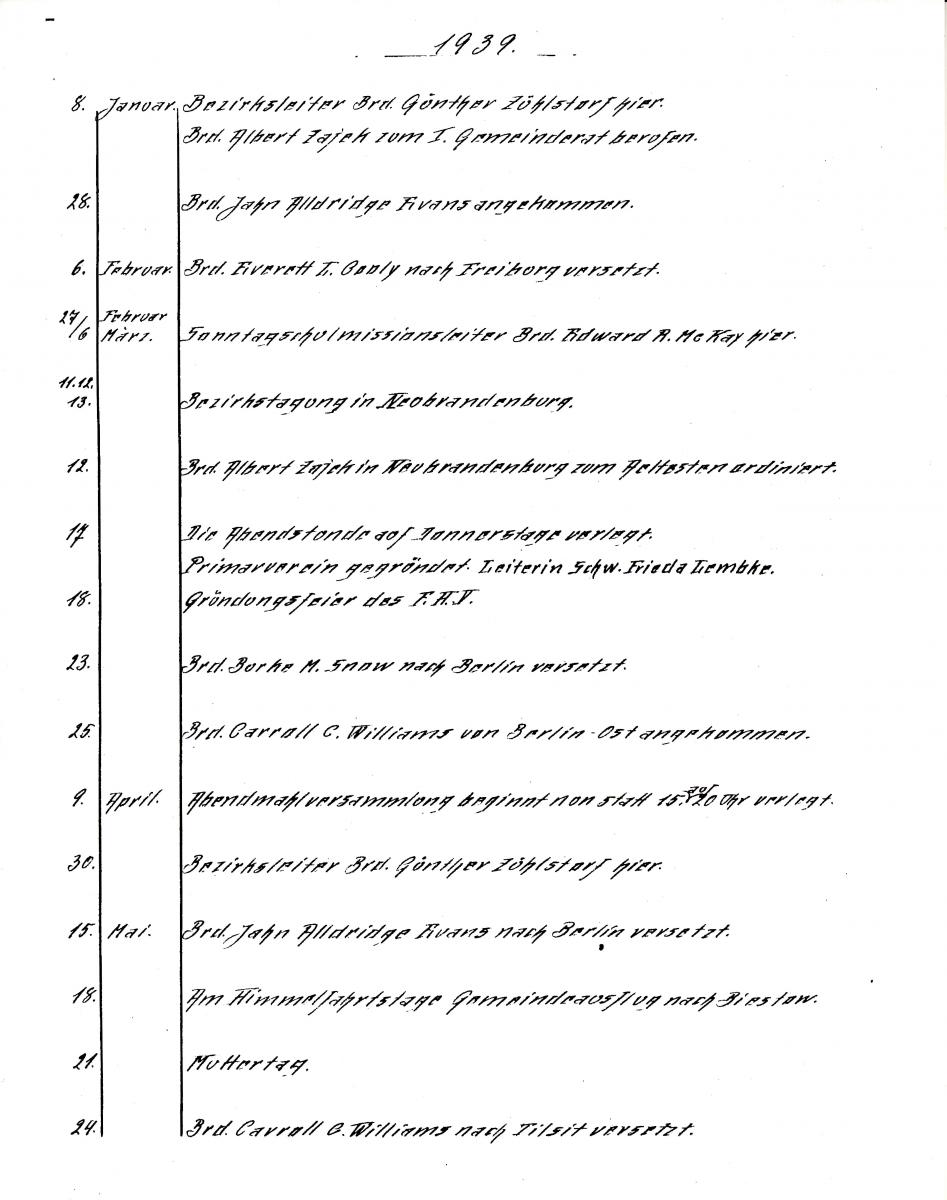 A page from the detailed history of the Rostock Branch (B. Ruthenberg)

Erika Ruthenberg took her children and left Rostock, hoping to escape the immediate dangers of war. In the recollection of her son, Bodo, she was fairly successful in finding better living conditions:

Later, we were evacuated to Steinhagen near Rostock in the countryside. It was a very refreshing experience. We lived in an empty farm house because the owner had fled. It was very idyllic, and we forgot that there was a war going on—no sounds of planes or bombs. But then the Russians came and jumped over the fence and broke it. I, as a little boy, went to them and told them that [their behavior] was absolutely not acceptable and that I didn’t like what they just did.

Bodo’s scolding of the enemy soldiers did not make him unpopular. They took him for rides in their vehicles, gave him some small food items, and in general treated him very kindly.

Walter Ruthenberg was captured toward the end of the war but was fortunate to be released in 1946. When he returned to Rostock, he found a new apartment for his family on Margarithenstrasse. According to Bodo, “We lived [there] many years . . . the bathroom was in the basement and only the third floor of the building was warmer.” Nevertheless, the family was together again and in good health.

The following members of the Rostock Branch did not survive World War II:

[4]. The meaning of (N.A.) is unclear but is apparently a reference to a province or a country.