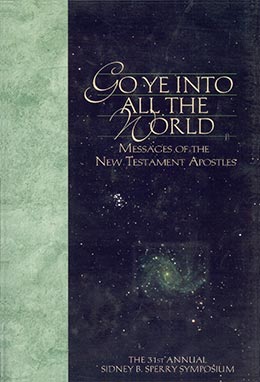 Go Ye Into All the World

Messages of the New Testament Apostles

Just before the Savior ascended into heaven, He commanded His Apostles to be “witnesses unto me both in Jerusalem, and in all Judaea, and in Samaria, and unto the uttermost part of the earth” (Acts 1:8). Armed with the power of God’s Spirit, these men boldly proclaimed the gospel, first in Jerusalem and its surrounding areas and ultimately to the far reaches of the Roman Empire and perhaps beyond. While we have no scriptural record of the post-resurrection missionary labors of such Apostles as Andrew, Bartholomew, or Thomas, the New Testament provides some information about the ministry of Peter, John, and Paul.

According to the book of Acts, the early Christian Church grew rapidly under the inspired leadership of Peter. For example, within a few weeks after the Savior’s ascension into heaven, three thousand souls were baptized in Jerusalem on the Day of Pentecost (see Acts 2:41). Many of these Jewish converts were visitors from such places as Parthia, Cappadocia, Asia, and Rome who would return home and establish important branches of the Church (see Acts 2:1–11).

As the Church continued to grow in Jerusalem, Judea, and Samaria, two important events occurred that would have significant impact. The first was a vision given to Peter in which the Lord authorized the gospel to be taken to the Gentiles (see Acts 10), while the second event was the conversion of Saul (see Acts 9), who would become one of the great missionaries to the Gentile world. Consequently, the Church grew rapidly among the Jewish, Greek, and Roman populations of such places as Antioch, Philippi, Ephesus, Corinth, and Rome. However, the Church’s rapid growth also produced some unique challenges. First, there was the need for trained leadership to preside over the growing branches of the Church. Second, as the Church flourished, it attracted the attention of some of the Jewish religious leaders in Jerusalem and the Diaspora, city magistrates and officials in some of the Greco-Roman cities where the Church had been established, and even the attention of several of the Roman emperors. These groups, as well as others, helped orchestrate a rising tide of opposition and persecution against God’s Church. Third, the doctrinal purity of the Church was challenged by false doctrines and practices introduced by new converts, apostates, and even local Church leaders intent on establishing their own form of destructive priestcraft. Finally the immoral practices of the Roman world were an increasing threat to the purity and unity of Church members everywhere.

To deal with these challenges, the Apostles, including Peter, John, and Paul, spent a great deal of time visiting the branches of the Church throughout the Roman Empire. Their personal contact with Church leaders and members was intended to strengthen and train the local leadership, edify the Saints, and purge the Church of false doctrines and immorality. When the Apostles could not visit the churches, they communicated through epistles filled with inspired teachings and counsel. Paul’s letters were written to members living in such places as Galatia, Ephesus, Corinth, Rome, and Thessalonica. His letters were doctrinal masterpieces on a variety of subjects, which included faith, marriage, morality, welfare principles, repentance, and the Resurrection. Paul’s letters promoted faith in the Savior and a greater understanding of the Atonement, corrected false teachings that were troubling the Saints, and encouraged members to hold “fast the faithful word” (Titus 1:9).

Both Peter and John’s epistles were written to members struggling to maintain their spiritual balance during times of severe persecution from the Roman government. Peter counseled the Saints to remain faithful in the face of persecution and to remember that “the eyes of the Lord are over the righteous, and his ears are open unto their prayers” (1 Peter 3:12). Both Peter’s and John’s epistles contain doctrines relating to the principle of faith, the Atonement, marriage, and the Second Coming, to mention only a few.

In addition to the writings of these men, other inspired Church leaders, such as James and Jude, also wrote epistles to members. All of these epistles, together with the Book of Acts, constitute the second half of the New Testament. The timeless doctrines taught by these individuals are as important and relevant to the modern Church as they were for the New Testament Church. Doctrines of faith in Jesus Christ, the Atonement, morality, marriage, and family taught in the New Testament epistles are applicable for our day as well. The chapters in this volume are based on the writings of these faithful men contained in the books of Acts to Revelation. In many cases, the contributors have sought to add additional insight from the scriptures of the Restoration, such as the Book of Mormon and the Doctrine and Covenants, as well as insights from the Joseph Smith Translation of the Bible. In many instances they have also consulted the Greek New Testament materials for insights. These materials add much to our understanding and appreciation of the doctrines taught in the New Testament epistles. We wish to thank the Religious Studies Center for their assistance in editing, source checking, and preparing the manuscript for printing.

We sincerely hope that your study of this book will strengthen your testimony of the Savior and His Atonement, as well as increase your understanding and appreciation of the important work of the Apostles and the doctrines they taught during the first century A.D.