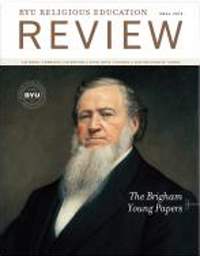 The New Testament: A Translation for Latter-day Saints

Nicholas J. Frederick (nick_frederick@byu.edu) was an assistant professor of ancient scripture at BYU when this was published.

Latter-day Saints have long had a complicated relationship with the King James Bible. Quoting the eighth article of faith, we embrace it as “the word of God,” yet we also maintain a distance from it through the declaration that our belief in its level of inspiration extends only “as far as it is translated correctly.” Our gauge for what constitutes “the word of God” tends to be Latter-day scripture—if certain verses from the Bible reflect the teachings of the Book of Mormon or the Doctrine and Covenants, then those verses are inspired and probably “translated correctly.” If verses from the Bible promote ideas that aren’t supported or are absent from the Book of Mormon or the Doctrine and Covenants, those verses are often dismissed as obsolete or not “translated correctly.” Further complicating the issue is the reality that the King James Bible has become rather obsolete in the twenty-first century, due less to issues of translation but even more to problems with textual transmission. The number of New Testament manuscripts available to textual critics today far outnumbers what the translators of the King James Bible had available in the early years of the seventeenth century, and many of these manuscripts reach further back into the second and third centuries of Christianity. As a result, newer translations such as the New International Version or the New Revised Standard Version are both more accurate and more readable than the King James Bible.

However, Latter-day Saints in the United States are still tethered to the King James Bible. It is still cited (with a few exceptions) as the authoritative biblical text in general conference and correlated material. This priority can likely be attributed to the Book of Mormon, the Doctrine and Covenants, the Book of Moses, and the Book of Abraham all being written in a language that reflects the overwhelming influence of the King James Bible. To leave behind the King James Bible at this point would perhaps feel like abandoning a parent in a retirement center. Yet to relegate the King James Bible to the sidelines, even in favor of more accurate English Bibles, would also grievously harm our ability to interpret restored scripture. In addition to the lengthy blocks of King James Bible that are reproduced almost word for word in the Book of Mormon and sections of the Doctrine and Covenants, there are also thousands of phrases from the King James Bible that have been carefully woven into the texts of our restored scripture, and the process of identifying and interpreting these thousands of phrases has only just begun. Thus Latter-day Saints are left in a bind—we are aware that better, more accurate English Bibles are available, but to adopt one of them over the KJV risks abandoning an important element of our own restored texts. This type of move would go beyond placing a parent in a retirement home; rather, it seems like forgetting we even had a parent.

Before being asked to respond to Thomas A. Wayment’s new book, the full title of which is The New Testament: A Translation for Latter-day Saints, I have to admit that I was quite skeptical that this Gordian knot would ever be satisfactorily cut, let alone untied. Now, after having read through Dr. Wayment’s book, I find myself surprised that he was able to resolve these issues so succinctly and thoroughly. The most notable element of Wayment’s project is that he provides a new translation of the New Testament. As I read through his translation, I felt that Wayment made a conscious effort not to fully jettison the language and wording that has made the King James Bible so dear to many of its readers. The spirit of the King James Bible is still present, and it hasn’t been so much modernized as it has been clarified. In other words, this is not a “street-legal” New Testament. For example, KJV Romans 6:23 reads “For the wages of sin is death; but the gift of God is eternal life through Jesus Christ our Lord.” Wayment renders this verse “For the wages of sin are death, but the gift of God is eternal life in Christ Jesus, our Lord.” Rather than alter the language just to make it different, Wayment maintains the familiar wording of the KJV, with a few small clarifications. However, he is also careful to correct places where the King James translators incorrectly translated the Greek, even if it means altering a well-known verse. Such is the case with John 5:39, which Wayment renders as “You search the scriptures” rather than the King James’s incorrect injunction to “Search the scriptures.”

But the new translation is only a small part of what makes Wayment’s project so remarkable. Throughout the book, each New Testament document is introduced with a lengthy preface that discusses issues such as authorship and the purpose of the book, as well as a section laying out the relevance of the document for Latter-day Saints. Some examples include the observation that Paul’s argument about justification by faith as laid out in Romans 3 is clarified in 2 Nephi 25:23, or pointing out the relevancy of Matthias’s selection as an Apostle in Acts 1. Each New Testament document is also divided into two columns, maintaining the look of the King James Bible, but Wayment also introduces each pericope (set of verses) with a short summary statement, omitting the chapter headings that are more familiar to Latter-day Saints. This addition serves to make the text more approachable and comprehensible. Furthermore, passages that represent text critical problems, such as Mark 16:9–20, Luke 22:43–44, John 7:53–8:11, and 1 John 5:7–8, are noted by Wayment and handled in a responsible manner. When appropriate, Wayment also includes comments from the Joseph Smith Translation, although he is careful to present the JST reading only as a possible reading rather than as the authoritative reading.

The most useful element of Wayment’s book will likely be the footnotes. Nearly every verse has a corresponding footnote, some of them quite lengthy. Some of the footnotes are instructional, helpful explanations of what a respective author may have intended to say but perhaps may not have said very well. Thankfully, Wayment eschews providing interpretations to controversial teachings, instead offering possible interpretations without guiding the reader toward a particular conclusion. Other footnotes add additional historical or cultural context or indicate places where the New Testament is alluding to the Old Testament. However, because this translation is intended for a Latter-day Saint audience, Wayment also notes the thousands of places where similar New Testament language appears in the Book of Mormon and the Doctrine and Covenants. Many of these parallels have been noted in other places, but it’s how Wayment chooses to classify the intertextual connections that may raise some eyebrows. He employs the classical hierarchy of “quotation,” “allusion,” and “echo” to illustrate the level of interaction, but he also does not shy away from stating that similar language appears in the New Testament and the Book of Mormon. For example, he writes that 1 Nephi 13:7 “uses language similar to Revelation 18:12” and observes that “the Book of Mormon preserves the adverb openly in 3 Nephi 13:6, although it is the product of “some late manuscripts.” In other words, Wayment argues that the New Testament, the Book of Mormon, and the Doctrine and Covenants share not just a likeness but even a similar DNA. While some may see this approach as problematic, I believe Wayment is to be commended for how straightforwardly he handles this thorny question. The result is that instead of ignoring the intertextual connections between the New Testament and Latter-day Saint scripture, Wayment foregrounds them, challenging readers to read both ancient scripture and modern scripture as a single scriptural project.

Dr. Wayment’s New Testament translation represents a remarkable accomplishment, not only in depth but in breadth. He successfully integrates elements of history, culture, language, intertextuality, and text criticism into one very readable and accessible book. In my opinion, what Wayment does here is on par with what Grant Hardy did in The Book of Mormon: A Reader’s Edition, which was to take a complicated scriptural text and enliven it, making it reader friendly without sacrificing complexity. I can easily see Wayment’s book being used by everyone from Latter-day Saint scholars to the casual attendees of ward Sunday School classes. For scholars looking to publish work on the Bible from a Latter-day Saint perspective, Wayment has set a very high bar. The only question I had when I was done reading the book was how soon it would be before I could place it in the hands of my New Testament students.