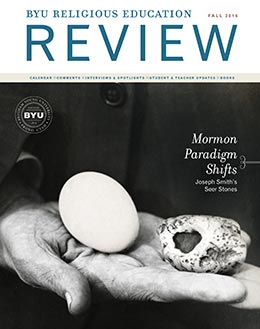 Michael Hubbard MacKay (michael_mackay@byu.edu) was an assistant professor of Church history and doctrine at BYU when this was published. 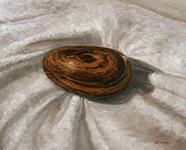 Changing what we think is always a tricky process, especially when it comes to religion. When new information becomes available, we cringe under an orthodox mindset, particularly when we challenge ideas and beliefs that have been “set in stone” for decades. Thomas Kuhn coined the term paradigm shift to represent this often painful transition in science of shifting to a new way of thinking. He argued that “normal science” represented a consensus of thought among scientists when certain precepts were taken as truths during a given period. He believed that when new information emerges, old ideas come crashing together with new ones, causing a crisis. Once the basic truths are challenged, the crisis ends in either revolution or dismissal.

The age of information that we live in today has likely caught nearly every member of the LDS Church off guard and bombarded them with new ideas. This is not completely unlike the Copernican Revolution that Kuhn used as one of his primary examples to explain the paradigm shift. Using similar instruments and comparable celestial data as those before them, Copernicus and others revolutionized the scientific view of the heavens by describing the earth orbiting the sun instead of the sun orbiting the earth. Ingrained Ptolemaic beliefs naturally protected the geocentric model, making the new idea almost impossible to grasp.

Paradigm shifts also occur in religion, though the stakes are different; many believe that the implications are more directly relevant and that they are certainly more applicable to the average believer. One major difference between Kuhn’s theory and change that occurs within Mormonism is that when lay members with varying knowledge and understanding are faced with new information, their revolutions may occur only privately.

This short article uses the example of seer stones to examine the idea of how new information slips into our Mormon lives. Throughout Church history, we have seen friends and family members have faith crises because of new things they learn about the Church, its members, and our history. Those who have experienced the onslaught of new information understand the gravity of these massive paradigm shifts in our lives. By looking at just one example, this article will provide a helpful way of thinking about new information and how to deal with it when it arrives. 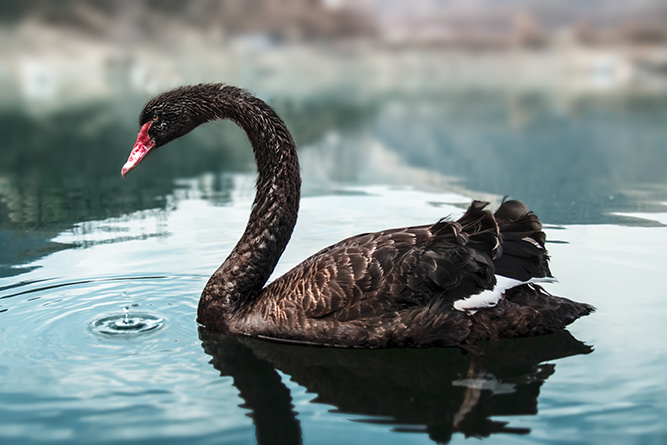 The Church published a photo of one of the legendary seer stones in the October 2015 Ensign. To some, this publication was like a present to a child at Christmas, with the child tearing the carefully wrapped paper from the box to find exactly what he or she was hoping for. To some members, the Ensign article revealed a whole new facet of early Mormonism, settling many of their curiosities. However, not every member was excited. Left without the inoculation of knowing about the seer stone before, the announcement may have felt strange to some members. They might have wondered why they had never heard of the seer stone and why the Church had not informed them earlier that it possessed the item.

Many who were concerned about the seer stone were apparently willing to understand how it worked during the translation of the Book of Mormon, but there were still some who were concerned that this was the first time they had heard of it. It is true that the rational mind of someone schooled in even the most basic sciences routinely wants to figure out how, for example, Jonah was swallowed by a big fish or how the Israelites walked through the Red Sea on dry ground. However, it is not uncommon for religious people, including Latter-day Saints, to be moved by the miraculous. When Joseph Smith’s seer stone was depicted in the Ensign, to some it was as if the rational mind played second fiddle to a more important issue: the dilemma of not knowing. 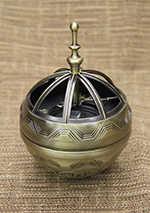 Members believed that Jesus walked on water and turned water into wine, yet the mystery of the seer stone was still troubling to some. In fact, the seer stone was disconcerting even though it seemed to have parallels to other stories in the scriptures, such as the words that appears to Lehi on the Liahona or the words that appeared to Belshazzar in the temple or even the seer stones that Mosiah II used to translate the twenty-four gold plates within the Book of Mormon. The shock of not knowing took some members off guard.

Our fragile world of understanding can be altered rapidly with new information. Before 1697, the Western world believed that all swans were white. Because they had never seen a black swan, it seemed an impossibility until a Dutch explorer found one in Western Australia. Contradicting the idiom that “all swans are white,” a single glimpse at a black swan instantly demolished an apparent reality while also enabling a new, more informed state of mind. In Mormonism, our black swans lie outside our regular conversations and expectations, usually hidden by our secular preconceptions and our current beliefs and knowledge. Like the Dutch explorer, we have seen a glimpse of something that didn’t seem possible. The seer stone has given us the opportunity to begin to reshape our understanding of the translation of the Book of Mormon and how prophets can communicate with God. Discoveries such as the black swan and the seer stone may always cause idiomatic pains as things we didn’t know previously are revealed, but they can also bring a sense of enlightenment in spite of our dogmatic tendencies. Even though we may perceive that we know what a swan looks like, there is always the possibility of the discovery of new types or breeds. Given the nature of historical discovery and continuous revelation from a prophet, we know there is always the possibility of the discovery of new facts or doctrines. Like the problem of inductive reasoning in science, there is always something that you don’t know that may be true.

Many of the things we believe seem normal to us, but only because they have become that way over a matter time. Take, for instance, the age of marriage in the United States. Marriage to a minor would be frowned upon today, yet young girls were often legally married as youthful teenagers in nineteenth-century America. Though this is an unusual example, it opens a door for less distinct instances to be identified. In Mormonism, the nature of the ninth article of faith, “We believe all that God has revealed, all that He does now reveal,” creates an ideal environment for normative knowledge to solidify in our minds, but the ninth article also declares, “He will yet reveal many great and important things.”

Because of such teachings like the ninth article of faith, the nature of Mormonism is prone to paradigm shifts. But these changes are also exacerbated by the information age that we live in. By the simple click of a mouse, historical information nestled away in archives reaches the average LDS member with relatively little effort. New information about Church history and theology are inevitable parts of our lives. This means that change and new information can potentially disrupt our sense of normative knowledge quite often, but it can also offer the potential for the concept of new information to become normative. Perhaps in the future, the paradigm shifts we experience will begin to exclude crises, and careful evaluation will allow for a smooth transition from not knowing to knowing. 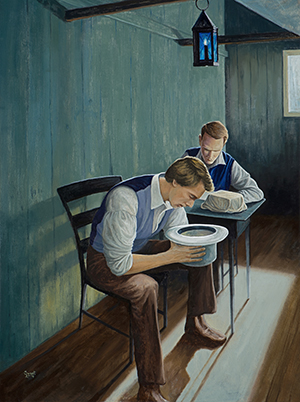 It is interesting that most Church members in our day do not know about the seer stones because they were a familiar topic in Joseph Smith’s day and well known to historians since that time. To Joseph Smith and early Church members, the idea of seer stones was normative, not because they were any easier to explain in the 1830s but because it was apparently a well-known fact that Joseph translated the Book of Mormon with seer stones. It wasn’t a secret; people knew about them. On the other hand, artwork that depicts the translation has excluded seer stones from the miraculous process that Joseph used to translate the gold plates. By releasing the photograph of the seer stone in the Ensign, the Church has begun a process of normalization, a process of recapturing the miracle in historical terms.

As believing Latter-day Saints, we can give pause to miracles just as Jesus’s disciples did when they saw him raise Lazarus from the dead, or as Mary did when she saw the resurrected Christ. Inevitably bound by our own secular thought patterns, we should not abandon our belief in miracles, but neither should we stop thinking logically. We should particularly encourage education; even Joseph Smith had to learn the value and purpose of his own seer stones. 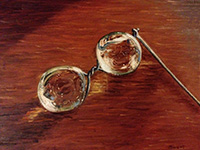 Joseph Fielding Smith declared in 1956 that Joseph had to become familiar with the “use of the Urim and Thummim” before translating or even studying the characters on the plates and sending them to scholars in New York City.[2] Knowledge of the seer stones will not change our doctrines; nor will it offer us salvation. But it is a lesson in the threat of normative thinking and the barriers we create when we refuse to acknowledge new information. After all, the basic principles and doctrines taught in Sunday School inspire us to fill our lives with study from the best books to elaborate upon the foundations of Mormonism.

With a great deal of literature on the topic of seer stones, one might wonder if we have chosen to forget or refused to understand. For instance, the early Saints saw the seer stones differently than we do today. The witnesses of the translation process described Joseph Smith’s use of seer stones as evidence that the Book of Mormon came from God. Emma declared that Joseph Smith did not have a prepared manuscript or book in front of him as he dictated the words of the Book of Mormon to his scribes. Oliver Cowdery reflected back upon his experience as Joseph’s scribe with fond memories as the “days never to be forgotten.” As Joseph Smith read the words delivered to him by God on the seer stones, he likely did not have time to reference other works or add his own insights into the narrative. It was a perfect way to demonstrate that Joseph Smith did not invent the content of the Book of Mormon, yet, with the march of time, somehow this miracle has faded in the minds of some Saints.

Members of the Church believe that Jesus walked on water, turned water into wine, raised Lazarus from the dead, healed the maimed, and appeared to thousands as a resurrected being; yet the mystery of the seer stone is still troubling to some. Knowledge of the seer stone will not change our doctrines, nor will it offer us salvation, but to maintain our belief in miracles is the foundation of the Restoration and the establishment of the Church in these latter days.