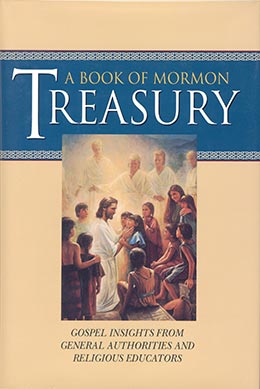 A Book of Mormon Treasury

In 1975 Jeffrey R. Holland, then dean of Religious Education at Brigham Young University, established the Religious Studies Center. The center (RSC) was given a charge to (1) promote and aid in the coordination of religious studies throughout the university and the Church, (2) promote the study and understanding of other cultures and religions within and beyond the Judeo-Christian traditions, and (3) promote sound scholarship that will enhance the understanding of the scriptures and history of The Church of Jesus Christ of Latter-day Saints.

In an effort to fulfill this last purpose in particular, the Religious Studies Center and Religious Education at BYU have sponsored annual symposia and conferences on the scriptures and history of the Restoration. From these symposia, outstanding papers and presentations have been published in books produced by the RSC. For over thirty years the annual Sidney B. Sperry Symposium on the Scriptures has been held at BYU. Named in honor of the former BYU dean of Religious Education and eminent gospel scholar, the Sperry Symposium has been a blessing to many members of the Church in their quest for greater understanding of the restored gospel of Jesus Christ. Each year the RSC publishes selected papers from the Sperry Symposium in a book. Five of those symposia and subsequent books were devoted exclusively to the Book of Mormon.

In addition, the RSC sponsored an annual Book of Mormon symposium for nearly a decade. Nine volumes were published containing well over a hundred articles from some of the Church’s most respected gospel scholars and religious educators. Additional publications on the Book of Mormon, not associated with these annual symposia, have also been published by the RSC during the last quarter of a century.

Unfortunately, many of those outstanding and important publications are no longer in print. The purpose of this volume is to bring together some of the most insightful articles on the Book of Mormon into a single volume. It is hoped that the articles contained herein will be a blessing to every faithful and serious student of the Book of Mormon, increasing knowledge, strengthening testimony, and motivating to greater personal righteousness. Other similar volumes of compiled classic articles dealing with each of the standard works of the Church are forthcoming.

At many of the symposia there were general authority keynote speakers. We have included six of those addresses as the first chapters of this volume. The rest of the book is organized, more or less, in the order of the books in the Book of Mormon—giving “coverage” of the books and the main doctrines contained therein. It is impossible to include in a single volume, or in many volumes for that matter, all of the doctrines, insights, and applications that are to be gained from a study of the Book of Mormon. What we have included, however, will hopefully provide many “gold nuggets” as the reader seeks to “mine” the hidden treasures contained in the “keystone of our religion.” It is our hope that these classic articles will enrich the reader’s love for and understanding of the Book of Mormon. The more we study the Book of Mormon, the more we will come to know that it is deeper and broader than all of us.