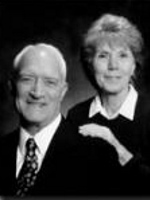 After joining the Church at age nineteen, R. Wayne Shute served a mission in Samoa from 1955 to 1958. Brother Shute graduated in 1964 with a doctorate degree in education from the University of Southern California. He returned to Samoa ten years later, serving as mission president from 1968 to 1971. He was later called to the General Sunday School Board and then filled a two-year assignment as a regional representative in New Zealand, Samoa, and Hawaii. Following a number of ward and stake callings, Brother Shute was called to the Church’s Correlation Committee (Materials Evaluation). In 1997, he was called to preside over the Apia Samoa Temple. Afterward, he and his wife, Lorna, taught English at Tongji University in Shanghai, China, through the BYU David M. Kennedy Center for International Studies. They then served a two-year mission to Armenia, where they were country directors for Latter-day Saint Charities, the humanitarian arm of the Church. He had a long and distinguished career as a professor in the David O. McKay School of Education at Brigham Young University. On three occasions, he was a visiting fellow and professor in Great Britain. He has lectured widely in Europe, Canada, and the United States. He retired from BYU in 1995. Brother and Sister Shute live in St. George, Utah. They have nine children and thirty-one grandchildren.