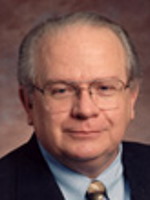 Stephen E. Robinson was a member of the faculty at Brigham Young University from 1986 to 2012, and served as  chairman of the Department of Ancient Scripture there for many years. Before working at BYU, he was tenured at Lycoming College after teaching religion there, at Hampden-Sydney College, at UNC-Chapel Hill, and at Duke. Robinson also served as chairman of the Scholars Program, of the Religion Department, and of the Faculty Senate at Lycoming.

Robinson received a BA in English and philosophy from the BYU Honors Program in 1971, graduating with "High Honors with Distinction." He received a PhD in Biblical Studies and Classics from Duke University in 1978. He has published in scholarly venues such as the Society of Biblical Literature, Revue de Qumran, the Coptoc Encyclopedia, Journal for the Study of Judaism, and the Anchor Bible Dictionary. Robinson also has several popular books, Are Mormons Christians?, Believing Christ (the "Best Book" Award-winner at ILDS Booksellers for 1995), Following Christ (the "Best Book" at ILDSB for 1996), and How Wide the Divide? (a "Best Book" Award-winner at Christianity Today in 1997). He has also received numerous awards for his research and teaching.

He and his wife, Janet, have six children.