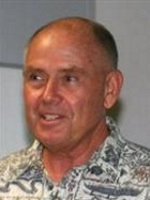 Riley M. Moffat was the senior librarian and head of reference at the Joseph F. Smith Library, Brigham Young University–-Hawaii when this was written. He is also professor of geography and was formerly a state-certified surfing instructor for the Exercise and Sports Science Department. He is the lead author of Gathering to La’ie, coauthor of the award-winning Palapala’aina series of books on the history of the mapping of Hawaii, author of a series of books on the population histories of cities and towns in the United States, Canada, Australia, and New Zealand, as well as books on the early maps of Utah and the US Geological Survey. He has lived in and led tours through the South Pacific for over forty years and is a past president of the Mormon Pacific Historical Society. His current interests include documenting Church history sites in the Pacific. He and his wife, Connie, have four children and ten grandchildren.