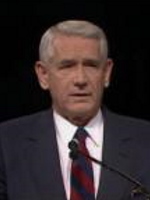 Dean LeRoy Larsen was born 24 May 1927 in Hyrum, Utah. After briefly serving in the United States Navy at the end of the Second World War, Brother Larson attended the University of Utah and Utah State University, graduating from Utah State with a degree in English and Spanish. Elder Larsen married Geneal Johnson, and they became the parents of five children. In 1962, he was appointed the secretary of the LDS Church Indian Committee. He taught for one year at the Institute of Religion at the University of Utah and then was asked to become president of the Church's Texas South Mission. Upon completing this three-year assignment, Elder Larsen taught at the Institute of Religion in Ogden, Utah. In the LDS Church, he has served as a bishop and regional representative. In 1976, Brother Larsen became the editor of all Church magazines. Later in 1976, he became a general authority and member of the First Quorum of the Seventy, where he served until being designated an emeritus general authority in 1997. From 1980 to 1993, Larsen was a member of the Presidency of the Seventy. He also served a term as Church Historian and Recorder. From 1998 to 2001, Elder Larsen was the president of the Church's Provo Utah Temple.