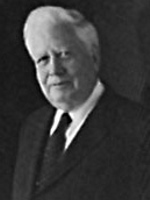 David M. Kennedy had impressive careers in both government and banking and was also a valiant servant of the Lord in his various callings for the Church. After serving as US Secretary of the Treasury and carrying out diplomatic assignments for the government, he spent several years in another type of ambassadorial role, as a special representative of the First Presidency. His efforts were instrumental in gaining recognition of the Church in many nations.