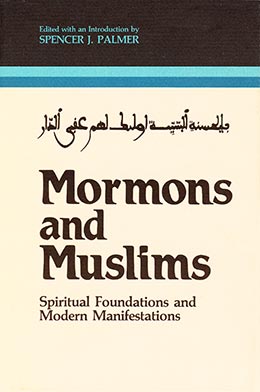 Islam, the faith of the Muslims, is a major world religion. Its believers are found on all of the inhabited continents. Nearly one out of every six people on earth today is Muslim.

In common with Christians generally, Mormons as a whole know little of Islam and its adherents. Yet the two religions have many interesting similarities and parallels. Examples include a firm belief in a living God and obedience to him; emphasis on the family; assistance to the poor and other social concerns; a sense of man's obligation to testify of God; belief in a physical resurrection and a life thereafter; and a total commitment to values and lifestyle rather than a mere creedal recitation.

Islam is considered a "biblical faith" in part because Muhammad, the Arabian prophet of the Muslim world, revered the teachings of Abraham and Moses and other Bible prophets. To this common ground between Muslims and Mormons is added the fact that both Muhammad and Joseph Smith are regarded by their respective adherents as instruments in the hand of God in revealing new scriptures, the Qur'an and the Book of Mormon—in each case under angelic direction.

In bringing together papers from a symposium held at Brigham Young University in October 1981, this book on Mormons and Muslims presents some of the finest and ablest exponents and interpreters of the Muslim faith. As well as relationships between that faith and Christianity generally, the book offers a new dimension in that much of the focus centers for the first time on parallels, similarities, and contrasts with the religion of the Latter-day Saints. This can be both explicit and implicit, as in chapters on pre-Islamic and Arabian prophets, the idea of redemption in Christianity and Islam, the Muhammad-Joseph Smith comparison, and religious practices of women in Islamic countries.

Many spontaneously arising questions about analogies between Mormonism and Islam find here an informed forum for discussion, especially by the Mormon participants who have lived among Muslims and studied their cultures and life-styles. As prophetic figures, how do Joseph Smith and Muhammad compare? What is the role of women in the Muslim faith? Could Hud, the Qur'an prophet, actually be the Book of Mormon Lehi? Is there really a relationship between Jesus Christ and the Mahdi, the redemptive figure in Islam? Not all the answers are here, but the concepts, experiences, and suggested conclusions will certainly inform and stimulate each reader's thinking.

For both critic and believer, for both scholar and general reader, for both Mormon and Muslim, as well as for all serious students of comparative religion, here is an intriguing and authentic exchange leading to a deepening understanding of "spiritual foundations and modern manifestations."