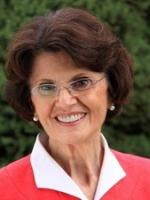 Ardeth Greene Kapp was the ninth general president of the Young Women Organization of The Church of Jesus Christ of Latter-day Saints from 1984 and 1992. During her tenure, Kapp had five different counselors: including Elaine L. Jack, Janette C. Hales and Patricia T. Holland. In 1992, Kapp was succeeded by Hales.

Kapp was the second counselor to Ruth H. Funk in the presidency of the church's Young Women organization from 1972 to 1978.