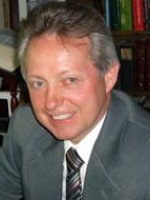 Terryl L. Givens was born in upstate New York, raised in the American southwest, and did his graduate work in intellectual history (Cornell) and comparative literature (PhD, UNC Chapel Hill, 1988), working with Greek, German, Spanish, Portuguese, and English languages and literatures. As professor of literature and religion, and the James A. Bostwick Professor of English at the University of Richmond, he teaches courses in Romanticism, nineteenth-century cultural studies, and the Bible and literature. He has published in literary theory, British and European Romanticism, Mormon studies, and intellectual history.