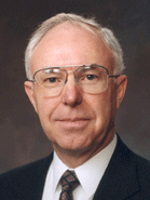 Elder Spencer J. Condie was born in Preston Idaho on August 27, 1940. He served a mission in the Southern Germany Mission from 1960 to 1963. It was on his mission that he met his wife, a native German missionary, named Dorthea Speth. Together the two have five children. He worked as a professor of Sociology and Ancient Scripture at Brigham Young University from 1969 to 1989. Elder Condie was called to the second quorum of the Seventy in April of 1989. He was an emeritus member of the seventy when this was written.