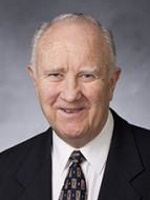 Elder C. Max Caldwell was a member of the Second Quorum of the Seventy from 1992 to 1997 and associate professor of Church history and doctrine at BYU. Growing up in Vernal, he played basketball, football, baseball, and ran track in high school. He attended the University of Utah, where he received his BS in business administration. In September of 1952, Elder Caldwell married his high school sweetheart, Bonnie Lee Adamson. They are the parents to five children. From 1953 to 1955 Elder Caldwell served a mission to the North Central States, then he served as a pilot in Korea for the US Army from 1958 to 1961. After that, Elder Caldwell came to BYU and received his MA in church history and doctrine. Elder Caldwell was a seminary teacher in Salt Lake and an institute teacher adjacent to Utah State University. When he was called to the Seventy he was a professor at Brigham Young University. He passed away on 19 June 2012.