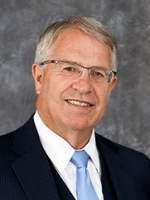 Stan LeRoy Albrecht was an American educator, university administrator, and scholar when this was written. He has served as the president of Utah State University since 2005. He was an undergraduate student at Southern Utah State College (now known as Southern Utah University) and Brigham Young University, initially majoring in veterinary science, but soon switching to political science and history, and then to sociology. Albrecht completed both his master's and doctorate degrees in sociology from Washington State University.

Coming to USU for his first teaching job in 1970, Albrecht remained in Logan for only a couple of years before accepting a faculty position at Brigham Young University. He stayed on at BYU for more than twenty years, first as a professor, and soon as department head, then dean, then academic vice president and associate provost. Following his time there, Albrecht accepted a research position as associate director of the epidemiological research center at the University of Florida Medical School. He was asked to apply for the position of dean of the College of Humanities, Arts, and Social Sciences at Utah State University in 1998, serving until 2001, when he was named provost of the university. Albrecht was appointed president of Utah State University on 1 February 2005.